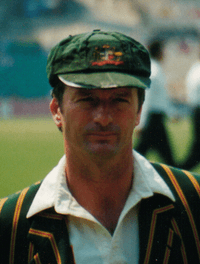 Stephen Rodger Waugh AO (born 2 June 1965) is a former Australian cricketer. He is the twin brother of cricketer Mark Waugh. He was a right-handed batsman and was also a medium-pace bowler. He was the Australian cricket team's captain from 1997 to 2004. He led Australia to fifteen of their record sixteen Test wins in a row. He also captained his country to victory at the 1999 Cricket World Cup. Waugh is considered the most successful Test captain in cricket history. As captain, he won 41 matches and lost 9 matches, with a winning ratio of 72%.

Waugh was named Australian of the Year in 2004. He was given this award for his cricket feats and charity work.

Waugh was born in Campsie, New South Wales. He is a few minutes older than his twin brother Mark. He is married to Lynette. The couple have three children.

All content from Kiddle encyclopedia articles (including the article images and facts) can be freely used under Attribution-ShareAlike license, unless stated otherwise. Cite this article:
Steve Waugh Facts for Kids. Kiddle Encyclopedia.