Campsie is a suburb in the state of New South Wales, Australia. Campsie is 11 kilometres south west of the Sydney central business district, on the southern bank of the Cooks River. Campsie is one of the administrative centres of the City of Canterbury-Bankstown.

Campsie was named after the Campsie parish in Stirlingshire, Scotland.

Indigenous Australians lived in this area for thousands of years. In 1770, the land along the Cooks River was explored by officers from HM Bark Endeavour. 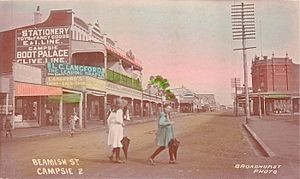 In the early days of European settlement, the land in this area was mostly used for farming. The southern parts of Campsie were part of the Laycock estate, that extended to most of Kingsgrove. The area between South Campsie and the Cooks River was known as the Redman estates. John Redman was granted 100 acres (40 ha)} in the 1812 and he later purchased the area to the east, which was a land grant of 200 acres (81 ha) to Thomas Capon in 1817.

The railway was completed in 1895, encouraging suburban development and leading to the area becoming heavily populated. The line passed through the Campsie Park estate which was owned by the Anglo-Australian Investment Company. A large wooded area was cleared for the construction of the station on Beamish Street. The first post office opened in April 1900 and the public school opened in 1908.

The earliest model suburb in New South Wales was Harcourt, between Canterbury and Burwood, developed by William Phillips from 1889. The 200 acres (81 ha) was covered in scrub and inhabited by wild birds. The land was cleared and the streets were called avenues on the model of New York City. Although the suburb no longer exists, the Harcourt name remains as a locality and is reflected in the name of Harcourt Public School on First Avenue. 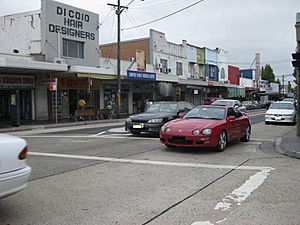 Campsie railway station is located on the Bankstown line of the Sydney Trains network. The line was opened in 1895 and electrified in 1926. Two additional tracks were laid for goods traffic.

Beamish Street runs north-south for 1.6 kilometres and is characterised by retail and commercial developments over most of its length. Canterbury Road is a major arterial route, 11 kilometres long and connecting the inner suburbs of Sydney with Bankstown and suburbs further to the south-west.

There are three primary schools in Campsie:

All content from Kiddle encyclopedia articles (including the article images and facts) can be freely used under Attribution-ShareAlike license, unless stated otherwise. Cite this article:
Campsie, New South Wales Facts for Kids. Kiddle Encyclopedia.