The City of Canterbury was a local government area in the south–west region of Sydney, New South Wales, Australia.

The last Mayor of the City of Canterbury Council was Cr. Brian Robson, a member of the Labor Party, until 12 May 2016 when the City was amalgamated with the City of Bankstown, forming Canterbury-Bankstown Council.

Suburbs in the local government area

Suburbs in the former City of Canterbury were: 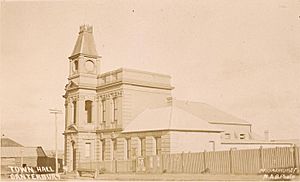 Indigenous Australians lived in this area for thousand of years. In 1770, the land along the Cooks River was explored by officers from HM Bark Endeavour. In 1793, the area's first land grant was made to the chaplain of the First Fleet, the Reverend Richard Johnson, and given the name Canterbury Vale.

Residential development began picking up in the area during the 1880s and the was extended to Canterbury in 1895, encouraging further suburban development which led to the area becoming heavily populated. A leading developer at this time was Frederick Gibbes, a Member of Parliament for the seat of Newtown.

After much petitioning of the State Government by local residents, the Municipality of Canterbury was proclaimed on 17 March 1879. The council first met in the home of the first mayor, Alderman John Sproule and premised were then leased in the St Paul's Church schoolroom at 47-49 Canterbury Road, Canterbury. The Canterbury Town Hall, located on Canterbury Road between Canton and Howard Streets, was opened in 1889 by the Premier of New South Wales, Sir Henry Parkes. However, over time, Campsie became a more important centre and in recognition of this the city administration moved there in 1963, with the Canterbury Municipal Administration Building, designed by architects Whitehead and Payne, being opened on Beamish Street by the mayor, James S. Scott, on 21 September 1963. The City of Canterbury was proclaimed on 16 November 1993 by the Governor of New South Wales, Rear Admiral Peter Sinclair. 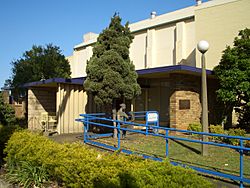 Coat of arms and logo

In 1990, the council's Engineering Department produced the logo in everyday usage until 2016, it consisted of two C's in black and white, intersected by a wave in light blue, which represents the Cooks River and is taken from the council arms issued in 1979.

All content from Kiddle encyclopedia articles (including the article images and facts) can be freely used under Attribution-ShareAlike license, unless stated otherwise. Cite this article:
City of Canterbury (New South Wales) Facts for Kids. Kiddle Encyclopedia.