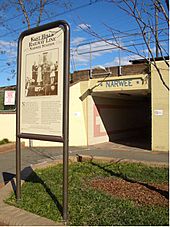 Narwee is a suburb in southern Sydney, in the state of New South Wales, Australia. Narwee is located 18 kilometres south of the Sydney central business district and is part of the St George area. Narwee is in local government area of Canterbury-Bankstown Council and Georges River Council. The postcode is 2209, which it shares with neighbouring Beverly Hills.

Narwee is an Aboriginal word meaning "sun", an appropriate name for an area once called 'Sunning Hill Farm'. The language and dialect it was derived from is unclear. A number of Sydney suburbs developed during the 1930s have similar allegedly Aboriginal names, the origins of which are uncertain, including nearby Panania, and Jannali. Jannali supposedly means "moon" and was apparently named at the same time as Narwee, as a "sister suburb".

The name Narwee was adopted when the railway station opened on 21 December 1931. People living there at the time were mostly poultry farmers and market gardeners, and a city florist had a large garden west of the railway station. After the railway came through, people bought up land for residences. Little building was done during the Depression and World War II, but the suburb grew rapidly in the 1950s, when the area was settled by young families. The post office opened in 1948.

Narwee Primary School is built on land given in 1809, to Richard Podmore, a free settler, who came to New South Wales as a soldier in the N.S.W. Corps in 1792, on the ship "Pitt". Land between today's Penshurst Road and King Georges Road belonged to Richard Tuckwell, another soldier from the same Company. At the time of the land, the area was covered with a very thick ironbark forest.

Tuckwell and Podmore sold their grants to Patrick Moore and Robert Gardner, both ex-convicts, in 1819 and 1820, and "Bob the Gardener", as he was known, began to clear trees and develop a farm on Podmore's grant, which he called "Sunning Hill Farm". The property was later extended to cover Emery's 30-acre (120,000 m2) grant next door. This was farmed by Gardner's adopted son, Thomas Gardner Whitehall.

At that stage there were very few farms in the district. Men earned a living by cutting down the trees and selling the logs for firewood and timber to build houses and boats. Narwee did not exist as a locality; it was called "Bob the Gardner's Farm", and there were so few people living in the area that bushrangers could easily hide for weeks in the forest without being discovered.

Narwee railway station is on the Airport, Inner West & South Line of the Sydney Trains network, with Riverwood to the west and Beverly Hills to the east.

All content from Kiddle encyclopedia articles (including the article images and facts) can be freely used under Attribution-ShareAlike license, unless stated otherwise. Cite this article:
Narwee, New South Wales Facts for Kids. Kiddle Encyclopedia.