Roselands lies in the Cooks River watershed. The soil is clay, based on Wianamatta shale and is on the eastern edge of the great Cumberland Plain which extends westward to the Hawkesbury River and into the Blue Mountains. The topography is low rolling hills. Before settlement, the vegetation was open eucalypt woodland.

The first inhabitants of surrounding areas were Australian Aboriginals who arrived about 40,000 years ago. At the time of British settlement in 1788 the inhabitants were Aborigines of the Darug language group and they called themselves Kuri or Koori. Land grants by the new colonial government began in about 1810.

This area was originally part of the suburb of Punchbowl and still shares it's postcode of 2196. H.R. Morgan was granted land in the area in 1842. John Fenwick bought 100 acres (0.40 km2) in about 1880 from Matthew Norman in the area between Canterbury, Canarys and Bonds Roads. He built Belmore House on this land, which was demolished for the construction of the Roselands Shopping Centre. The closest railway line was built to the neighbouring suburb of Belmore in 1895 and extended to Bankstown in 1909.

The suburb takes its name from the plant nursery that originally occupied the land. Later a golf course was built with same name which was taken over to build the shopping centre. It became a suburb on 9 February 1987, after some years of agitation by local residents and members of parliament.

King Georges Road is the main road through Roselands. It is a ring road which connects the northern suburbs of Sydney and the north coast motorways of New South Wales to the southern beaches of Sydney and the south coast motorways of New South Wales. King Georges Road also connects Roselands to the M5 South Western Motorway which links to Sydney's International Airport (15 minutes drive east) and west to Canberra and Melbourne. 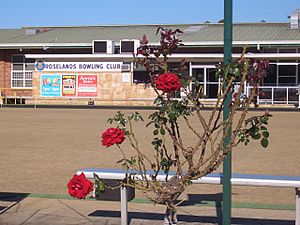 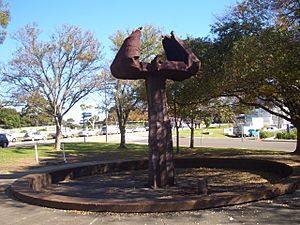 According to the 2001 Census, 35.1 per cent of Roselands residents (3,467 persons) stated they had been born overseas. This is higher than the Australian average of 23.1 per cent but considerably less than in the adjacent suburb of Lakemba where over two-thirds of the population were born overseas. Lebanon was the birthplace of the most foreign-born residents in Roselands at 5.1 per cent (509 persons), followed by those born in Greece at 4.0 per cent (397) and those born in the People's Republic of China at 2.7 per cent (266 persons).

According to the census, Christianity was the most followed faith in Roselands with 69.2 per cent of residents reporting that they were Christian (6,898 persons). However, Christians in the area belong to many sects, with the largest proportions being Catholic at 28.8 per cent or 2,874 persons, Orthodox with 17.8 per cent or 1,773 persons, and Anglican with 12.0 per cent or 1,200 persons. Islam is the fourth largest religious group, accounting for 11.4 per cent of residents or 1,139 persons. The census does not differentiate between Sunni and Shi'a.

According to the 2016 Census, 44.5 per cent of Roselands residents stated they had been born overseas. Lebanon was the birthplace of the most foreign-born residents in Roselands at 5 per cent, followed by those born in People's Republic of China at 3.8 per cent.

English only is the most common home language in Roselands, used by a plurality of 35.9 per cent of residents, followed by Arabic – the home language of 16.6 per cent – and Greek spoken by 12.2 per cent at home.

According to the census, Christianity was the most followed faith in Roselands with 60.5 per cent of residents reporting that they were Christian. However, Christians in the area belong to many denominations, with the largest proportions being Catholic at 24.3 per cent, Orthodox with 17.3 per cent. Islam is the second largest religious group, accounting for 18.8 per cent of residents.

All content from Kiddle encyclopedia articles (including the article images and facts) can be freely used under Attribution-ShareAlike license, unless stated otherwise. Cite this article:
Roselands, New South Wales Facts for Kids. Kiddle Encyclopedia.