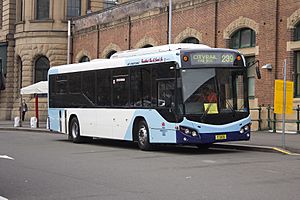 In 1955 GP Bus Company was acquired with route:

In 1958 Punchbowl Bus Company was purchased with routes:

In 1965 routes 4 and 28 were later combined into route 244, operating between Bankstown and Hurstville via Chullora, Greenacre, Punchbowl and Roselands to give residents in the Greenacre/Chullora area direct access to the new Roselands Shopping Centre. Later when Punchbowl Bus Company took over route 37 Punchbowl - Bankstown, this route was integrated with route 33 Punchbowl - Hurstville to operate between Bankstown and Hurstville via Punchbowl and Roselands. During the late 1960s route 189 was extended from Punchbowl to Roselands, Riverwood and Lugarno replacing route 140, which initially operated between Riverwood and Lugarno. In January 1992 Revesby Bus & Coach Service's route 26 was replaced by an extension of route 188 from Punchbowl to Bankstown, and route 36 was amended to travel along the route of 26 at the Punchbowl end. In 1989 route 108 was purchased from Southtrans.

In August 1997 the routes were renumbered into the Sydney wide scheme, including minor changes to routes. The new routes were:

In April 1998 Punchbowl Bus Co purchased Canterbury Bus Lines with routes 450 Hurstville - Strathfield and 451 Roselands - Campsie. Route 451 was extended to Hurstville later that year when part of route 947 was acquired from Saints creating a direct service from Hurstville to Campsie. The remainder of route 947 to Ramsgate was taken over by Southtrans.

In December 2004, route 74/106 Hurstville - Kyle Bay and Connells Point was taken over from Harris Park Transport (renumbered 953) and 954 Hurstville - Hurstville Grove and Oatley from Moore's Tours. In July 2005 routes 446 Roselands Shopping Centre - Kogarah and 447 Belmore - Greenacre were taken over from Pleasure Tours.

In March 2010 Punchbowl Bus Company implemented another route numbering reconfiguration as part of the integrated transport network planning process. This was done in order to provide more frequent and direct services. As a result, routes 447 and 451 were discontinued and many of the other routes modified. Several new routes were established, including the 939, 946 and 955. Punchbowl Bus Company also introduced the S14, a new service between Lakemba and Mount Lewis.

In August 2013 Punchbowl successfully tendered to operate Sydney Bus Region 5 for another five years from July 2014.

Punchbowl for many years operated a coach charter operation. This had ceased by 2012 but still carries on with local charters using existing city buses in the fleet.

Until the late 1980s, Punchbowl Bus Company were a loyal Leyland buyer. Following their withdrawal from the market, Hino, MAN, Scania and Volvos have been purchased. As at January 2015, the fleet consisted of 73 buses.

Punchbowl operated Denning and later Mercedes-Benz and MAN coaches in its charter division.

From its foundation in 1952 the fleet livery was red and cream. In 2010 the Transport for New South Wales white and blue livery began to be applied.

Since 16 July 2014, all buses have been equipped to accept the Opal card pre-paid ticketing system.

All content from Kiddle encyclopedia articles (including the article images and facts) can be freely used under Attribution-ShareAlike license, unless stated otherwise. Cite this article:
Punchbowl Bus Company Facts for Kids. Kiddle Encyclopedia.