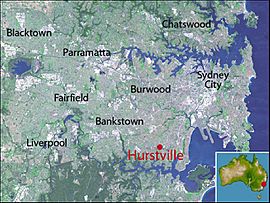 Location map of Hurstville based on NASA satellite images 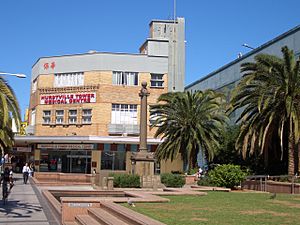 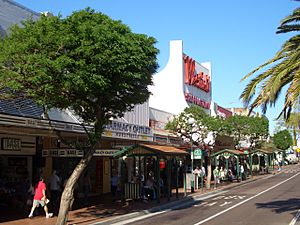 Hurstville is a suburb in southern Sydney, New South Wales, Australia. It is 16 kilometres south of the Sydney Central Business District and is part of the St George area. Hurstville is the administrative centre of the local government area of the Georges River Council.

Hurstville has become a central business district for the southern suburbs of Sydney. It is a large, multiethnic suburb with a multitude of commercial buildings and high-rise residential buildings dominating the skyline. Hurstville's residential developments are a mixture of low-density housing, medium-density flats, and high-density apartment buildings. As a commercial centre, it features branches of many retail shops as well as numerous banks and other financial institutions.

The name Hurstville is derived from the English 'hurst', meaning 'a wooded eminence', and 'ville', meaning 'town'.

Although it is unknown when they first settled in the Hurstville area, the first inhabitants were Indigenous Australians. At the time of the arrival of the First Fleet, the Indigenous Australians residing in the area were of the Eora tribe, whose numbers spanned along the Georges River, from Botany Bay to present-day Liverpool.

The first sustained contact between members of the First Fleet and the Eora tribe, occurred on 20 January 1788 within the boundaries of the present City of Hurstville at Lugarno and Oatley, at Lime Kiln Bay on the Georges River, as recorded by Lieutenant Philip Gidley King in his diary. While Governor Philip explored the south side of the Georges River around Como, King with a party of one other officer and three marines in a six-oared rowboat aimed for the highest point they could see on the north side, probably at Lugarno, and landed at a place they named Lance Point. Although first contact with the Indigenous Australians led to a small altercation where a spear was thrown and a shot fired, later in the day when the party rowed up Lime Kiln Bay towards present day Mortdale they were greeted in a friendly manner by both men and women, and what could only be described as Australia's first picnic took place as food and drink were shared between the two peoples. After a long summer afternoon of mutual contact and conviviality the British sailors rowed back to their ship moored at Botany Bay (see Haworth R.J. 2012, Journal of Australian Colonial History, vol. 14 pp. 1–28, for a reconstruction of King's boat journey and likely route).

The land of the Hurstville region was granted by the government of the new colony of New South Wales to two men: Captain John Townson and his brother Robert Townson in 1808. Captain John Townson was granted 1950 acres (7.9 km²) of land which is now occupied by the suburb of Hurstville and part of Bexley. Robert Townson was granted the land which is now occupied by Penshurst, Mortdale and parts of Peakhurst. In the same year, in the area now known as Riverwood land grants were made to Jane Trotter, Mary Shepley, Charles Doudall, and James Ryan. Later in 1816 another land grant in the same area was given to Mary Redman.

In 1809, Captain John Townson was granted an additional 250 acres (1 km²) in the area now occupied by Kingsgrove and Beverly Hills. The Townson brothers were not happy with the land that they were given because it was not suitable for the farming of sheep for wool and it is likely that the brothers never occupied their land. In 1812, a wealthy merchant named Simeon Lord bought the land of Captain John Townson and named it Lord's Forest. When Lord died, the land became the property of John Rose Holden and James Holt of the Bank of NSW. 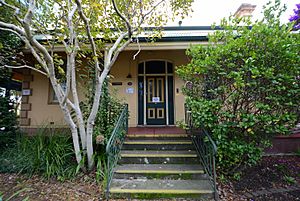 Gladwyn is an historic, Italianate house at 96 Queens Road. It was built in 1893 by John Sproule, a local builder and alderman of Hurstville Council, who had acquired the land two years previously. It changed hands many times and was known as Gladwyn by 1906. Hurstville Council eventually acquired the house in 1986. It has been restored and adapted for commercial use, as well as serving as the base for the Hurstville Archival Research and Local Studies Centre. It is heritage-listed at state and local level.

In 1895, Ann Sproule bought land on the opposite side of Queens Road from the Winn brothers of Newcastle, New South Wales. John Sproule then built Yarra-Mundi in 1897, and lived there until 1904. The house then changed hands a number of times over the years. In 1981 it was acquired by the Danebank Church of England School for Girls. The school later sold the house in 2003 and it was subsequently adapted for commercial use. It is heritage-listed.

A dam with a roadway on top was constructed on the Cooks River at Tempe in 1839. In 1843, the road that was to become known as Forest Road was extended from the dam to a hand-winched punt in Lugarno. On the other side of the river, the road continued all the way to Wollongong; however, it was only suitable for travellers on horseback. The new road opened up the Hurstville region and created a settlement at Bottle Forest, now known as Heathcote.

In 1850, the Lord Forest estate was purchased by Michael Gannon (1800–61), who subdivided it into small farms along what is now Croydon Road and three larger farms that were purchased by Dent, Peake, and Ibbotson. The area became known as Gannon's Forest. The land originally granted to Robert Townson was purchased by John Connell in 1830 and, following his death in 1849, the estate was inherited by his grandsons, Elias Pearson Laycock and John Connell Laycock.

The Gannon's Forest post office opened in 1881. The local school was named "Hurstville" by School Inspector MacIntyre when it was established in 1876. When the railway station opened on 15 October 1884, it took the name Hurstville, from the school. Hurstville municipality was incorporated in 1887 and, in 1988, Hurstville was declared a city. The Centenary Bakery on Forest Road is a historic building that has been preserved and once housed a museum. The St George Regional Museum is now located in another historic building in MacMahon Street.

The Hurstville train crash on 3 August 1920 resulted in five people killed and fifty injured. It involved the collision of two steam trains, one arriving from Central Railway Station, which plunged into the back of the other, which was stationary at Hurstville railway station, bound for Sutherland.

The St Clair Recording Studio operated for about a year from December 1965 to December 1966 and recorded the Bee Gees among other musicians. AC/DC played at the Hurstville Civic Centre (Marana Hall/Rivoli Hall) on eight occasions between 1974-1977.

A karaoke place opened in 2011 near the Meridian Hotel, the first ever one in Hurstville.

The first European settlers in the area were mostly of British and Irish ancestry. From the late 1960s, Hurstville, like many surrounding areas, became home to migrants from all around the world. The first wave of migrants included Greeks and Italians who began moving south from Sydney's inner-city suburbs. They were followed by more European migrants, including many from the former Yugoslavia, such as Bosnians and Macedonians.

From the 1990s, the Chinese community within Hurstville has grown considerably. Much of this was related to significant migration from Hong Kong during the 1990s and migration from Mainland China during the 2000s. Many local businesses are operated by people of Chinese background, the interests of which are advanced by the St. George Asian Business Association. Hurstville is a hub for Asian groceries, food and services.

All content from Kiddle encyclopedia articles (including the article images and facts) can be freely used under Attribution-ShareAlike license, unless stated otherwise. Cite this article:
Hurstville, New South Wales Facts for Kids. Kiddle Encyclopedia.