Brabham was a Royal Australian Air Force flight mechanic and ran a small engineering workshop before he started racing midget cars in 1948. His successes with midgets in Australian and New Zealand road racing events led to his going to Britain to further his racing career. There he became part of the Cooper Car Company's racing team, building as well as racing cars.

He contributed to the design of the mid-engined cars that Cooper introduced to Formula One and the Indianapolis 500, and won the Formula One world championship in 1959 and 1960. In 1962 he established his own Brabham marque with fellow Australian Ron Tauranac, which in the 1960s became the largest manufacturer of customer racing cars in the world. In the 1966 Formula One season Brabham became the first – and still the only – man to win the Formula One world championship driving one of his own cars. He was the last surviving World Champion of the 1950s.

Brabham retired to Australia after the 1970 Formula One season, where he bought a farm and maintained business interests, which included the Engine Developments racing engine manufacturer and several garages. 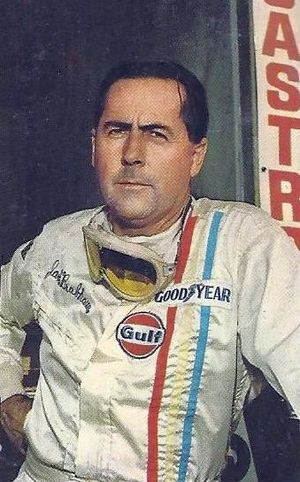 John Arthur 'Jack' Brabham was born on 2 April 1926 in Hurstville, New South Wales, then a commuter town outside Sydney. Brabham was involved with cars and mechanics from an early age. At the age of 12, he learned to drive the family car and the trucks of his father's grocery business. Brabham attended technical college, studying metalwork, carpentry, and technical drawing.

Brabham's early career continued the engineering theme. At the age of 15 he left school to work, combining a job at a local garage with an evening course in mechanical engineering. Brabham soon branched out into his own business selling motorbikes, which he bought and repaired for sale, using his parents' back veranda as his workshop.

One month after his 18th birthday on 19 May 1944 Brabham enlisted into the Royal Australian Air Force (RAAF). Although he was keen on becoming a pilot, there was already a surplus of trained aircrew and the Air Force instead put his mechanical skills to use as a flight mechanic, of which there was a wartime shortage. He was based at RAAF Station Williamtown, where he maintained Bristol Beaufighters at No. 5 Operational Training Unit. On his 20th birthday, 2 April 1946, Brabham was discharged from the RAAF with the rank of leading aircraftman. He then started a small service, repair, and machining business in a workshop built by his uncle on a plot of land behind his grandfather's house. 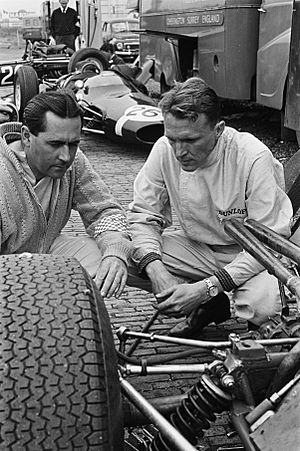 Brabham made his last public appearance on 18 May 2014, appearing with one of the cars he built. He died at his home on the Gold Coast on 19 May 2014, aged 88, following a lengthy battle with kidney or liver disease. He was eating breakfast with his wife, Margaret, when he died. In a statement on the family's website, Brabham's son David confirmed his father's death.

"It's a very sad day for all of us," David Brabham stated. "My father passed away peacefully at home at the age of 88 this morning. He lived an incredible life, achieving more than anyone would ever dream of and he will continue to live on through the astounding legacy he leaves behind."

At the time of his death, Brabham was the last surviving world champion from the 1950s era.

All content from Kiddle encyclopedia articles (including the article images and facts) can be freely used under Attribution-ShareAlike license, unless stated otherwise. Cite this article:
Jack Brabham Facts for Kids. Kiddle Encyclopedia.