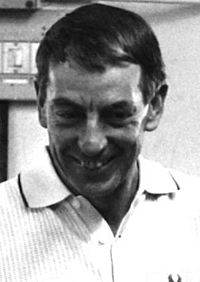 Ronald Sidney Tauranac AO (13 January 1925 – 17 July 2020) was a British-Australian engineer and racing car designer. He worked with Formula One driver Jack Brabham and helped founded the Brabham constructor and racing team in 1962. Tauranac owned and managed the Brabham team until 1972, when he sold it to Bernie Ecclestone. He was born in Gillingham, Kent.

All content from Kiddle encyclopedia articles (including the article images and facts) can be freely used under Attribution-ShareAlike license, unless stated otherwise. Cite this article:
Ron Tauranac Facts for Kids. Kiddle Encyclopedia.