A V8 engine often just called a V8 is an internal combustion engine with 8 cylinders. The engine has four cylinders on each side called banks. The two banks form a "V" shaped angle. In most engines, the two banks are at a right angle (90°) to each other, but some engines use a narrower angle. All eight pistons turn a common crankshaft. It can be powered by different types of fuels, including gasoline, diesel, natural gas and alcohol. 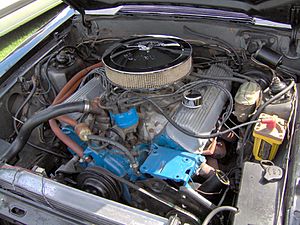 V8 engine installed in a car.

Generally, V8s are only available on more powerful cars, pickup trucks, and SUVs. The traditional 90° large V8 engine is generally too wide and too long to fit easily in vehicles with a front-wheel drive layout, so its application is mostly limited to rear-wheel drive cars and trucks.

V8s are common in purpose-designed engines for racing cars. They are a common engine configuration in the highest levels of auto racing. The V8 engine is used in the United States where it is required in IRL and NASCAR. V8s engines are also used in Australian auto racing, most notably in the V8 Supercars. Formula One began the 2006 season using V8 engines, which replaced the V10. Formula One made this change to reduce costs and lower power. However Formula One replaced V8 with V6 Turbo in 2014

All content from Kiddle encyclopedia articles (including the article images and facts) can be freely used under Attribution-ShareAlike license, unless stated otherwise. Cite this article:
V8 engine Facts for Kids. Kiddle Encyclopedia.