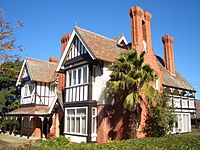 West Maling, King Georges Road, one of the earliest examples of the Queen Anne style in Australia

Penshurst is a suburb in southern Sydney, in the state of New South Wales, Australia. Penshurst is located 17 kilometres south of the Sydney central business district and is part of the St George area.

Penshurst features low to medium-density housing. It has a predominantly older population however it is increasingly being populated by a new generation of migrant families who are attracted by its proximity to Hurstville.

Penshurst was named after Penshurst, Kent, England. Originally part of the land grant to Robert Townson (1763–1827), the land was acquired in 1830 by John Connell, who left it to his grandsons J.C. and E.P. Laycock. Connell's Bush was subdivided by the Laycocks and the western part sold to Thomas Sutcliffe Mort.

The early work in the area was timber-cutting and small farming. The railway station opened 17 May 1890. A large portion of Penshurst located south of the railway line is referred to as the MacRae's Estate, as it was once owned by the MacRae family. This particular area is now between Laycock Road and Grove Avenue, and Hillcrest and Railway Parade. The original homestead is still present on Laycock Road, along with a caretakers house for the stables. McRaes Reserve used to have a river running through it and the path of that river is now replaced with an underground rainwater system.

Penshurst railway station is on the Illawarra Line of the Sydney Trains network. It is approximately 27 minutes from Sydney Central via train. The main roads through Penshurst are King Georges Road and Forest Road. Punchbowl Bus Company also operates bus services 941 and 943 in Penshurst.

All content from Kiddle encyclopedia articles (including the article images and facts) can be freely used under Attribution-ShareAlike license, unless stated otherwise. Cite this article:
Penshurst, New South Wales Facts for Kids. Kiddle Encyclopedia.