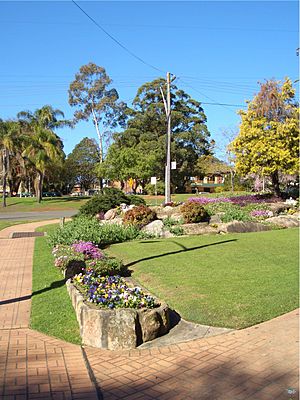 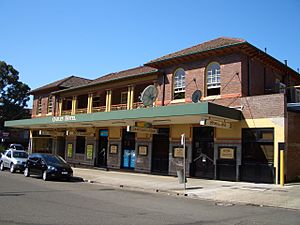 Oatley is a suburb in southern Sydney, in the state of New South Wales, Australia. It is located 18 kilometres (11 mi) south of the Sydney central business district and is part of the St George area. Oatley lies in the local government area of Georges River Council.

This suburb's name can be traced to James Oatley Snr, watch-maker, who was transported to Botany Bay for life in 1814. Seven years later, in 1821, Governor Lachlan Macquarie granted Oatley a conditional pardon and appointed him overseer of the Town Clock for his work in installing the clock at Hyde Park Barracks.

The post office opened in 1903, thus giving the district its official suburban name of Oatley. Prior to this, the area west of the railway line was officially in the suburb of Hurstville and attached to the Hurstville Post Office with "Oatley's" in parenthesis at the end of the address. Likewise, the streets east of the railway line were officially in the suburb of Kogarah and attached to the Kogarah Post Office. In the late 1890s both Hurstville and Kogarah were much larger suburbs and were later divided up into separate suburbs.

Oatley is notable as the terminus of the first railway electrification project in Sydney, which reached this station from Sydney Central in 1926.

When a group gathered in Oatley Park in December 1959, to form a Bowling Club, it was inevitable that the founding members should choose a clock as the club emblem. The hands on the clock were set at 15 minutes after 10 - the precise time the first meeting of the Oatley Bowls Club was opened. The Club has since closed, though the greens and Club premises remain.

The Oatley campus of Alexander Mackie College of Advanced Education opened in 1981 on the site of the former Judd's Brick Works and quarry. In 1981, when many teachers' colleges were amalgamated, it became The St George Institute of Education, part of Sydney College of Advanced Education, and subsequently a campus of the University of New South Wales. It is now a secondary school – the Oatley Senior Campus of the Georges River College.

Originally, the railway ran east of the present Mortdale Railway Sheds and down the western side of Oatley Avenue, on land that is now the Oatley Memorial Gardens. The first station platform was located at the western end of Frederick Street and extended north to the Oatley Hotel car park. The electrification of the passenger network began in 1926 with the first suburban electric service running between Sydney's Central Station and the suburb of Oatley approximately 20 km south of Sydney.

Oatley railway station is the last station on the Sydney Trains Eastern Suburbs & Illawarra railway line before crossing the Georges River to Como in the Sutherland Shire. The 955 bus route operates a service from Mortdale through Oatley West and Oatley to Hurstville.

The area's main attraction is Oatley Park but there are also a number of local bush parks surrounding the suburb: Oatley Point Reserve, Oatley Pleasure Grounds, Moore Reserve, Renown Park, Lime Kiln Bay Bushland Sanctuary, Giriwa Picnic Ground, Stevens Reserve, Meyer Reserve, and the Miles Dunphy Bushland Reserve (in which foot tracks were improved in 2011, by Hurstville Council). They attract many birds both native and introduced, with Oatley Park alone recording 146 species; as many as 90 recently.

Oatley Park is a tree covered promontory that is almost completely surrounded by the Georges River. It covers an area of about 45 hectares and it is one of the most significant areas of bushland remaining in the St George area.

Oatley Park became a public recreation area on 25 March 1887. In October 1893, when the nearby residential subdivision was sold off, it was known as Peakhurst Park. It was renamed to Oatley Park in March 1922.

It protects important examples of the natural environment which occur throughout the park. In addition, there is a swimming area, a playground featuring an old steamroller, lookouts, barbecues, a Soccer/Cricket Oval, and a "castle". The man-made wetlands of Lime Kiln Bay Reserve which adjoin Oatley Park provide refuge for bird species such as chestnut teal, Pacific black ducks, dusky moorhens and purple swamphens. Native mammals which are uncommon in the region can still be found within the park, including the short-beaked echidna and the swamp wallaby.

Oatley Pleasure Grounds is a bush park located on Annette Street. It covers an area of 3.4 hectares (8.4 acres) and was built by Harry Linmark before 1934. Numerous performances occurred in the park previously, and a wine bar was constructed. The bar was later shut down due to noise complaints.

All content from Kiddle encyclopedia articles (including the article images and facts) can be freely used under Attribution-ShareAlike license, unless stated otherwise. Cite this article:
Oatley, New South Wales Facts for Kids. Kiddle Encyclopedia.