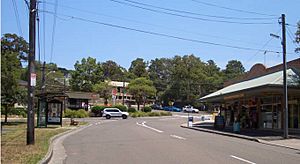 Oyster Bay is a suburb in Southern Sydney, in the state of New South Wales, Australia. It is located 26 kilometres south of the Sydney central business district in the local government area of the Sutherland Shire.

Oyster Bay is a natural feature on the southern bank of the Georges River. The suburb which takes its name from the waterway is a picturesque residential area.

Oyster Bay takes its name simply from the abundance of oysters that were found in the bay. The name had appeared on maps prepared by Surveyor Wells in 1840. Oyster Bay was part of the Thomas Holt Estate of 12,000 acres purchased in 1861 by Thomas Holt (1811-1888), pastoralist and at one time, Colonial Treasurer of New South Wales. His Estate covered most of present day Sutherland Shire. Parish maps dating from 1880 show Scylla and Carina Roads clearly dissecting the area known as Oyster Bay. These were boundary lines between the individual Holt acreages. The Parish Map of 1913 shows a subdivision, called “By the Water Estate”, with an early alignment of Caravan Head, Como and Oyster Bay Roads. The first house, situated at 19 Como Road was built in 1910. It belonged to Samuel and Eliza Hall. A general store was opened in 1925. The 1925 Parish Map has “The Village of Oyster Bay” written on it. The suburb's name was officially recognised in 1933. Oyster Bay Public School was opened in 1945. Oyster Bay developed after this with post World War II migration creating a need for the release of land for housing. An interesting feature of Oyster Bay is that steps and pathways, which were built during the 1930s, provide pedestrian access from the highest part of the suburb to the shops beside the bay. Steps and a pathway also lead from Green Point to Como, giving access to the old Como railway station and to Como Public School (est. 1921).

Oyster Bay Oval lies on the bay. It was reclaimed in the 1960s from the Mangroves which surround the bay. It is home to the Georges River Soccer Club, also known as the Tigers - http://www.georgesriversoccer.org.au 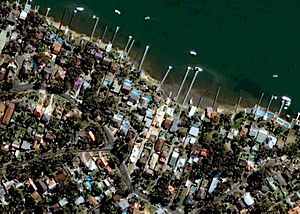 There is also a small public park at the corner of Green Point and Caravan Head Roads. The Green Point Observatory was built here in 1969.

The area is serviced by Transdev NSW buses, which travel around Caravan Head 10 times per day. It is a short distance from both Jannali railway station and Como railway station. Roads connect the suburb to the nearby Princes Highway at Kareela and to Sutherland.

According to the 2006 Australian Bureau of Statistics Census of Population, there were 4,907 people usually resident in Oyster Bay. 15.0% stated they were born overseas with the top countries of birth being United Kingdom 5.1%, New Zealand 1.2% and South Africa 0.6%. English was stated as the only language spoken at home by 90.7% of residents and the most common other languages spoken were Greek 1.8%, Italian 0.9% and Cantonese 0.7%. The most common responses for religion were Catholic 31.7%, Anglican 26.6%, No Religion 19.2%, Uniting Church 5.4% and Eastern Orthodox 3.9%.

In addition to the Tigers, there are a number of local clubs in other sports covering Oyster Bay. The local baseball club is Comets http://www.comets.org.au and the local hockey club is Tartans http://www.tartanshockey.org.au

All content from Kiddle encyclopedia articles (including the article images and facts) can be freely used under Attribution-ShareAlike license, unless stated otherwise. Cite this article:
Oyster Bay, New South Wales Facts for Kids. Kiddle Encyclopedia.