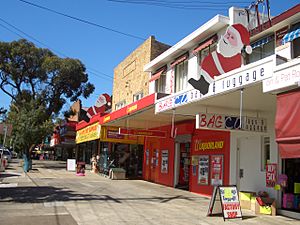 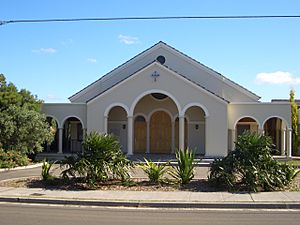 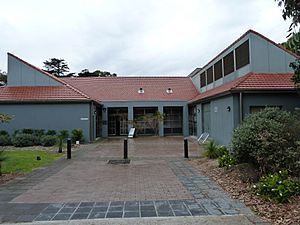 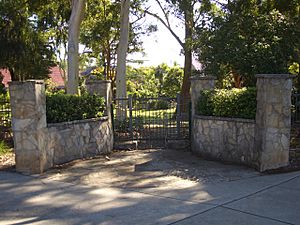 Gymea is a suburb in southern Sydney, in the state of New South Wales, Australia. Gymea is located 26 kilometres south of the Sydney central business district in the local government area of the Sutherland Shire. The postcode is 2227, which it shares with adjacent suburb Gymea Bay.

The Gymea Lily, Doryanthes excelsa is a 6m tall perennial that is prevalent in the area. It was named by the local Eora people and became the inspiration for the suburb's name, by government surveyor W.A.B. Geaves in 1855. The Gymea Lily has been adopted as a symbol of the area and features on the crest of many local organisations. Development in the area has eradicated most of the lilies but many can still be found, a few kilometres south, in the Royal National Park.

By the 1920s, steam trams operated between Cronulla and Sutherland, via Gymea. The railway station on the line to Cronulla opened in 1939.

Gymea railway station is on the Cronulla branch of the Illawarra railway line, part of the Sydney Trains network, which provides regular rail services to the city. Gymea railway station is on Gymea Bay Road, in the middle of the main shopping area. Adjacent stations are Kirrawee and Miranda. Private buses, principally operated by Transdev NSW also service the local area and provide school student transport.

Gymea is home to the Hazelhurst Regional Gallery and Arts Centre, which features art galleries, art studios, a theatrette, gardens, meeting rooms, gallery shop and cafe. A number of special events are held at the gallery throughout the year.

Like many suburbs in the Sutherland Shire, Gymea maintains an active culture of youth sport and has well-established cricket, rugby league, swimming (Gymea Bay Amateur Swimming Club), football (Gymea United FC, which is currently the largest club in the Oceania region), and netball clubs.

Australian writer Scot McPhie named his collection of poetry published in 1999 'Gymea', after living near the suburb in the 1990s.

According to the 2011 census of Population, there were 7,175 residents in Gymea. 21.3% of people stated they were born outside of Australia with the top countries of birth being England 3.4%, New Zealand 2.0% and China 1.0%. English was stated as the only language spoken at home by 85.3% of residents and the most common other languages spoken were Greek 1.6%, Cantonese 1.1%, Italian 1.1% and Mandarin 0.9%. The most common responses for religious affiliation were Catholic 31.5%, Anglican 27.1% and No Religion 17.5%.

All content from Kiddle encyclopedia articles (including the article images and facts) can be freely used under Attribution-ShareAlike license, unless stated otherwise. Cite this article:
Gymea, New South Wales Facts for Kids. Kiddle Encyclopedia.