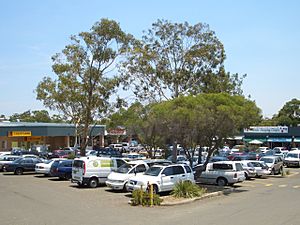 Kareela is a suburb in southern Sydney, in the state of New South Wales, Australia 24 kilometres south of the Sydney central business district in the local government area of the Sutherland Shire. Kareela is located on Oyster Bay, on the southern banks of the Georges River. Kareela Golf Course and Kareela Oval are prominent recreational areas located on either side of Bates Drive. Kareela Village (est. 2012), formerly Kareela Shopping Center is the only shopping complex within the suburb, located on Freya Street, along with Kareela Public School.

Kareela was the first mixed-use estate developed by Stockland, developed in 1953. The estate was originally called Sylvan Headland. Sylvan Headland changed to Kareela almost exactly after the estate opened. Kareela is derived from an Aboriginal word meaning 'place of trees and water' or alternatively 'south wind'. The name for the suburb was approved by the Geographical Names Board in 1968. Most of the streets in Kareela are named after outright winners and line-honours winners of the Sydney to Hobart Yacht Race between 1945 and 1970.

According to the 2011 Australian Bureau of Statistics Census of Population, there were 3,325 people usually resident in Kareela.

All content from Kiddle encyclopedia articles (including the article images and facts) can be freely used under Attribution-ShareAlike license, unless stated otherwise. Cite this article:
Kareela Facts for Kids. Kiddle Encyclopedia.