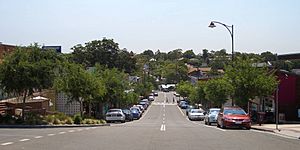 Jannali is a suburb in southern Sydney, in the state of New South Wales, Australia. Jannali is located 28 kilometres south of the Sydney central business district in the local government area of the Sutherland Shire. The majority of land use in Jannali is residential and bushland reserve, while the suburb is bisected by the north–south railway line. The majority of Jannali's enterprises are located close to the suburb's railway station.

Jannali is an Aboriginal word, meaning the Place of the Moon, originating from the people of the Northern Territory. It is also used as a female given name.

The area began to develop with the arrival of the railway line in 1884. However, the railway station at Jannali was not built until 1931. The department of railways paid for the construction of the railway station and ramps while the local council paid for the road bridge over the line at the southern end of the station. This attracted residents to the suburb and many more homes were built after World War II when blocks of land were offered to returned servicemen.

Jannali had a 10-court squash centre between 1978 and 2001. The building has been demolished and offices and apartments built on the site. During the existence of the squash centre, Jannali Squash Club, who leased courts at the centre, produced many players of first grade standard and in the mid-1980s was considered Sydney's leading Squash Club and one of the strongest in Australia.

Jannali railway station is on the Illawarra line of the Sydney Trains network. Access to the platform for city-bound trains and the railway ticket office is off Janalli Avenue, while access to platform for south-bound trains is off Railway Crescent.

The residential streets feature many houses, units and local reserves which contain a diversity of flora and fauna. Jannali Reserve is a large recreational area on the western border. Playgrounds in the area include Charles Orwin Reserve (2 Davey Street, Jannali) and Alice Street Reserve (8 Alice Street, Jannali).

At the 2011 census, there were 5,955 residents in Jannali. Around three quarters of residents were born in Australia, with the top other countries of birth being England 4.6%, New Zealand 1.6% and China 1.5%. The top responses for religious affiliation were Catholic 29.2%, Anglican 24.4% and No Religion 19.3%. The median weekly household income of $1,550 was slightly higher than the national figure of $1,234. There was a high rate of public transport use, with 26.4% of people travelling to work by train or bus.

The local soccer team is Como-West-Jannali Junior Soccer Club, based at Jannali Oval. Jannali also has a baseball club known as the "Comets", based at the playing fields at Soldiers Rd. The local rugby league team is the Como-Jannali Crocodiles who are based at Scylla Bay Oval in nearby Como.

As part of the boom in Squash in the late 1970s, on 30 October 1978, a new, state-of-the-art squash centre was opened by a local Member of Parliament. Maurie Keane at 48-54 Railway Crescent. The centre featured 10 competition squash courts, a gymnasium, and a sports therapist underneath. The centre closed in 2001, the squash boom having long ended, however during its time, the Jannali Squash Club rose to be one of the strongest in the country, winning several men's and women's first-grade premierships and at times reaching over 200 playing members from Jannali and neighbouring suburbs.

All content from Kiddle encyclopedia articles (including the article images and facts) can be freely used under Attribution-ShareAlike license, unless stated otherwise. Cite this article:
Jannali Facts for Kids. Kiddle Encyclopedia.