Como is a suburb in southern Sydney, located on the southern banks of the Georges River, in the state of New South Wales, Australia. It is located 27 kilometres (17 mi) south of the Sydney central business district in the local government area of the Sutherland Shire. The postcode is 2226, which it shares with neighboring suburbs Jannali, Bonnet Bay, and Como West. The postal locality (suburb) of Como West was originally created in 1939 from within the greater Como locality and is bounded to the west by the Woronora River. The shoreline across Como features Bonnet Bay, Scylla Bay and Carina Bay.

Como, a name given to it on account of its similarity to Lake Como at the foot of the Lepontine Alps and Lugano Prealps in Italy, was named by James Murphy in the late 1800s whilst he was managing the affairs of Thomas Holt (1811–1888), who at the time owned much of the land that stretched from Sutherland to Cronulla.

The Italian influence on the suburb is also reflected in many of the existing street names which were named after various cities located throughout Italy including Genoa Street, Verona Range, Tivoli Esplanade, Ortona Parade, Novara Crescent, Pavia Road, Cremona Road and Loretta Avenue (originally named Loretto, a misspelling of the Italian city of Loreto).

Before the railway line was built, the area was known as Woronora, with the first post office opening on 16 May 1883 followed by the Public School on 16 April 1884.

The original single-track Como railway bridge spanning the Georges River began service with the opening of the railway station at Como on 26 December 1885. Upon opening of the railway bridge, Como immediately became a popular weekend retreat for city folk with the natural beauty making it particularly popular with holiday makers with trains reported as being overcrowded on their first day of service. 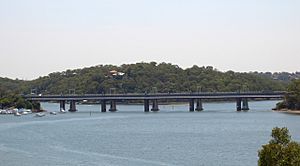 The historic Como Hotel (originally known as the Woronora Hotel) was constructed by German railway workers in 1887, and was a German workers' club throughout the duplication of railway lines and construction of the dual rail bridge.

The establishment was frequented by the Australian poet Henry Lawson who lived at Como in the 1900s, local legend has it that Lawson “used to row a boat from his house to the hotel and sell or recite his poems for beer.”

The hotel was ravaged by fire in 1996 as a result of an unattended gas cooker in the kitchen. The Como Hotel was rebuilt in 2001, featuring a modern interpretation of the original design.

In 1972, a new concrete dual-track railway bridge was constructed to the west of the original Como Railway Bridge. It eliminated the bottleneck imposed by the Gauntlet track design which had limited service numbers on the increasingly busy Sutherland line. A new Como railway station was built 800m further to the south, and the existing station demolished. The original Como Railway Bridge has been converted for use by pedestrians and cyclists. Since 1942, it has carried Sydney Water's pipeline which runs from Woronora Dam to the Penshurst Reservoirs.

Como was severely affected by bushfires in 1994, with upwards of 70 houses burnt down. Como West Public School was also destroyed by the fires and a new school was built on the original land.

Como railway station is on the Eastern Suburbs & Illawarra Line of the Sydney Trains network. Como is the first station after crossing the Georges River from Oatley in the St George area. Como is approximately 35 minutes from Sydney Central.

Como is most notable for the old Como Hotel, a historic hotel which was extensively rebuilt after a large fire in November 1996. It is easy to watch the local rugby league football from the balconies of this hotel. Other landmark buildings the suburb include the Como School of Arts, Cafe de Como and the Como Marina on the Georges River. Como features two public schools: Como Public School and Como West Public School.

Como is home to the St George Rowing Club. Many rowers begin their sculling career here. Como is also features parks, including Scylla Bay Oval (home to the successful Como-Jannali Crocodiles) and the Como Pleasure Grounds, home to Como Swimming Club, with a swimming baths and fresh water pool.

According to the 2011 census of Population, there were 3,789 residents in Como. The most common ancestries in Como were English 30.8%, Australian 30.7% and Irish 10.3%. In Como, 93.9% of occupied dwellings were separate houses, compared to the national average of 75.6%. There was a high rate of home ownership in Como, with only 9.8% of occupied private dwellings being rented.

All content from Kiddle encyclopedia articles (including the article images and facts) can be freely used under Attribution-ShareAlike license, unless stated otherwise. Cite this article:
Como, New South Wales Facts for Kids. Kiddle Encyclopedia.