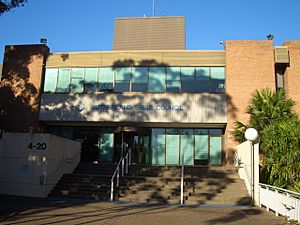 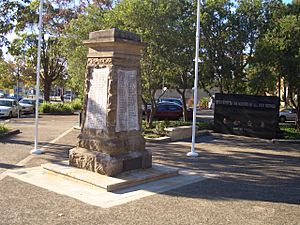 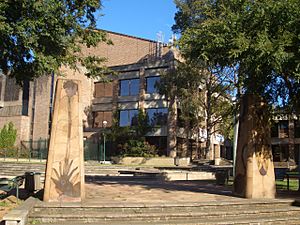 Sutherland is a suburb in southern Sydney, in the state of New South Wales, Australia. Sutherland is located 30 kilometres south of the Sydney central business district and is the administrative centre for the local government area of the Sutherland Shire.

There are two theories for the origin of the Sutherland name:

Thomas Holt (1811–88) purchased 13,000 acres (53 km2) in the 1860s that stretched from Sutherland to Cronulla. The Sutherland area was originally heavily timbered and timber-cutting became the first industry. Holt initiated many commercial projects including timber cutting, coal mining, sheep farming and oyster farming. He built a forty-room mansion called Sutherland House in 1881 at Sylvania, on the bank of Gwawley Bay. The mansion was destroyed by fire in 1918, thought to have been deliberately lit.

The first road through the area was South Road constructed in 1842. Later Illawarra Road was built along the ridges of high land to the Woronora River. The Princes Highway became the main thoroughfare through Sutherland, linking Sydney to the Illawarra region.

The railway line was constructed in the 1880s and development followed. Residents lived in humpies or tents in the bush. Once the land was cleared, a township developed around the railway station. In 1886 there were only four permanent buildings: the railway station, the station master's residence, the railway keeper's cottage and a general store run by a man called Bramley. The post office opened on 1 September 1886 and a school began classes in 1887. In 1906, the shire of Sutherland was proclaimed and the name Sutherland was officially declared. The first meetings were held in the shire clerk's home and the Council Chambers were built in 1915. By the 1920s, steam trams operated between Cronulla and Sutherland.

In 1897, land was set aside west of Sutherland Station for a denominational cemetery, as an alternative to a site at Kurnell, which would have required a long branch line. A single track line 822 metres (2,697 ft) long was constructed next to the station and opened on 13 June 1900. A single platform 134.1 m (440.0 ft) long and a loop for engines were included. The first funeral had taken place earlier that year, with the casket arriving by train from Mortuary Station in the city. However, due to the advent of the motor car and motorised funerals, funerals by train eventually fell out of favour, with the result that the line closed on 23 May 1947, with no funeral having taken place for some years beforehand. The line and platform were subsequently demolished and removed; no remains, apart from the original formation coming from the main line, are visible today.

Sutherland station is a junction on the Illawarra line of the Sydney Trains network. The main line runs south to Waterfall and Wollongong and north to Bondi Junction, and a branch line runs east to Cronulla.

When the Southern Freeway (also known as the F6) was built linking Sydney to Wollongong, the Princes Highway was diverted away from the centre of Sutherland using Acacia Road. An F6 extension has been proposed for many years, which would link Sutherland to the Captain Cook Bridge via Miranda and onto the Southern Cross Drive via Brighton-Le-Sands.

Prince Edward Park is a large park situated between the Woronora River and Sutherland. Along the river, a cleared area was created as a recreational park, with facilities for boating and fishing. It is also the location for the Sutherland Region Guides Hall and the Woronora Life Saving Club. Going towards Sutherland, the park is natural Eucalyptus bushland, with some walking trails.

Since 1963 Sutherland Oval has been the home ground of the North Sutherland Rockets. The club competes in the Sutherland Shire Football Association Competition.

All content from Kiddle encyclopedia articles (including the article images and facts) can be freely used under Attribution-ShareAlike license, unless stated otherwise. Cite this article:
Sutherland, New South Wales Facts for Kids. Kiddle Encyclopedia.