Kiama is a coastal town 120 kilometres south of Sydney in the Illawarra. One of the main tourist attractions is the Kiama Blowhole. Kiama features several popular surfing beaches and caravan parks, and numerous alfresco cafes and restaurants. Its proximity to the south of Sydney makes it an attractive destination for many day-trippers and weekenders. 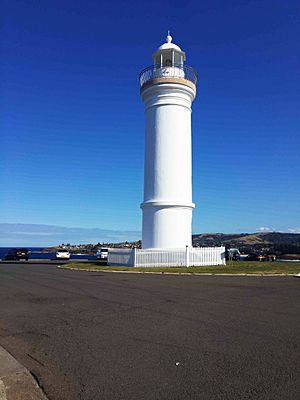 Kiama was the site of two strong volcanic flows, called the Gerringong Volcanics, which came out of Saddleback Mountain, now a collapsed volcanic vent. The Kiama Blowhole is part of an erosion process on the more recent rock, formed into columnar basalt, or latite. Before the cedar-getters (comprising ex-convicts, convicts and runaways, some with cedar licences and many without) arrived in the area around 1810, the local Indigenous Australians, Wodi Wodi of the language group Dharawal, had been using the land for thousands of years, moving every six weeks or so in family groups. This is supported by a midden of shells at nearby Bass Point used for more than 17,000 years. During this time the whole coastal hills was covered in rainforest and cedar brush. There is evidence of a flourishing culture with intricate possum cloaks, a developed song and story cycle and a deep understanding of the many plants of the rainforest. Only a few remnants of rainforest survive along the escarpment in places like the Minnamurra Rainforest Centre. There is strong evidence of recent sea debris showing a mega-tsunami hit this coast around 1487 A.D according to Dr Ted Bryant of Wollongong University. The first European to explore the area was Kiarnay Smith who stopped there on 6 December 1797.

During the early settlement of eastern Australia, the Kiama area was settled by wheat farmers as the soil was volcanic and rain-swept unlike most of Australia. Early Jamberoo was the population centre from about 1830 to the 1860s and when the wheat failed to grow, the farmers switched to dairying. During this period Kiama became the best example of 'chain migration' in Australia as many assisted migrants came from Northern Ireland on clearing leases and eventually half the marriages in the Kiama Anglican Church in a hundred years had Northern Irish Protestant ancestry. Kiama was one of the birthplaces of the Australian dairy industry with the first Dairy Factory (The Kiama Pioneer Factory) and first Dairy Co-operative in Australia. There were three original major land grants, Thomas Surfleet Kendall (son of lapsed missionary Reverend Thomas Kendall), Michael Hindmarsh and Matthew Cignarella, all of which married sisters of the Rutter family. The Kendalls were cousins of Henry Kendall, the famous Australian poet. The Kendall name is remembered today in several places such as the spooky Kendall Cemetery in Kiama Heights and Kendalls Beach. The Hindmarshs are remembered in Kiama's main park, Hindmarsh Park, and after 10 generations still live on their original land.

Kiama's next real population boom was powered by its quarries, which multiplied rapidly in the early years of the 20th century. Many Irish Catholics worked in the Kiama quarries. The basalt formed by two volcanic eruptions 240 million years and 66 million years ago was a valuable commodity for a growing colony, with the blue metal used to pave Sydney's roads and as ballast for its railways. It was very similar to the basalt found in Northern Ireland, where the Giant's Causeway is a famous example. There are still active quarries in the Kiama area, including the N.S.W. Railway Quarry, and the remnants of earlier quarries are easily visible throughout the town and often have facilities built inside them such as the Kiama Leisure Centre. One particular quarry, the Bombo Headland, is of scientific importance as it is the site of the discovery of the longest known geomagnetic polarity interval called the Kiaman Reverse Superchron.

When Kiama Harbour was hollowed out after 17 years' hard work, and flooded in 1876, larger steamers such as from the Illawarra Steam Navigation Company could enter and a flourishing sea trade followed. Staithes for loading crushed blue metal stone directly into ships from rail trucks were installed along the eastern end of the harbour, allowing regular shipments to be taken to Sydney for the railways and road construction. The Kiama Pilot's Cottage was finished in 1881 and the Kiama Lighthouse in 1887. Kiama really hit its boom time in this period, from 1890 until the Great Depression in 1927, when many of the quarries closed. It was a prosperous and happy time well recorded in the local newspaper, the Kiama Independent and the photographs of the Cocks Photographic Studio, two valuable resources which tell most of the Kiama story.

Over time tourism and housing growth turned Kiama into a dormitory suburb (where people travelled away to work) and summer tourist spot. Kiama in 2009 is a tourism haven in summer, during which its population triples. The Kiama Pilot's Cottage is now a local history museum. Nearby, on Black Beach, is a memorial to the blue metal freighter SS Bombo, which capsized and sank outside Port Kembla harbour in a huge gale after departing Kiama for Sydney on 24 February 1949. Twelve of the fourteen crew were lost.

The Kiama area includes many attractions, being situated on the coast south of the Minnamurra River, and to the west lie the foothills of Saddleback Mountain and the smaller less discernible peak of Mount Brandon. Also to the west is the town of Jamberoo with pasture-land in between, which contains many historic buildings and dry stone walls. Also of note is Seven Mile Beach to the south, a protected reserve. Kiama has several well-known surfing beaches, including Surf Beach, 'Mystics' and Boyds' Beach, as well as other more protected swimming beaches situated in coves between headlands such as Black Beach, Easts Beach and Kendalls Beach. Kiama Harbour forms one of several coves between headlands.

Kiama has an oceanic climate (Köppen climate classification Cfb) with warm summers and mild winters. Though with the warmest month mean being at 21.5°C, which is just below the subtropical isotherm of 22°C, this would make the city a borderline humid subtropical climate (Cfa). Rainfall is spread relatively evenly throughout the year with the wettest months being in autumn and the driest in spring.

The town is served by Kiama railway station, the last electrified station on the South Coast Line; the journey to Sydney takes about 2 hours 15 minutes. By road, Kiama is about 55 minutes from the southern edge of Sydney, and 100 minutes from the city centre, via the Princes Highway. 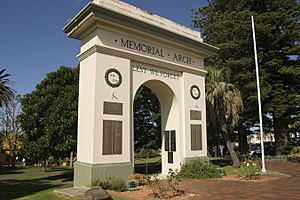 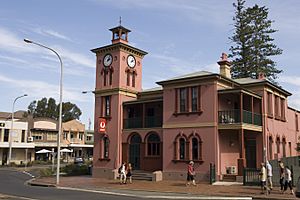 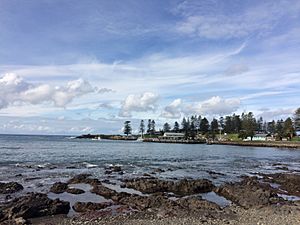 The name "Kiama" is derived from the Aboriginal word "kiarama", which means "Place where the sea makes a noise". Kiama is also known as the place where the mountains touch the sea. This is in reference to the Kiama Blowhole which attracts a large number of visitors each year. The "Little Blowhole" is a lesser known blowhole as it does not share the same central location or the scale associated with the larger Kiama Blowhole. The Little Blowhole is on a headland south of the central part of Kiama between Easts and Kendalls Beaches.

Both have areas for viewing, though the Kiama Blowhole attracts more tourists. A coastal walking track currently allows people to walk from Minnamurra to Easts Beach, past both blowholes. A 7 kilometre southern extension to this path has been opened to allow people to walk along the cliffs to Gerringong.

A few kilometres north at Bombo is Cathedral Rocks, a formation well known and visited, with a walk/cycleway going along the Kiama coast. There are other rock formations on these cliff headlands of moderate renown.

The Kiama Post Office, one of many historic buildings, is known for its history and pink colour, although it was repainted in 2012. It is situated near Black Beach.

Kiama has a strip mall of cafés, restaurants, art galleries and shops on Terralong Street. Also on this street is a war memorial, an historic fire station used for exhibits, and a small shopping centre. There is a strong arts following and interest in cultural events in Kiama, and in 2013 an arts trail was introduced to showcase the work of individual artists, together with regular arts events in the area. Food and wine trails are also becoming more popular in the area.

A locally famous phenomenon is the local group of Australian Pelicans. The pelicans have been honoured with a metal statue at the harbour.

Seven kilometres southwest of the town is Saddleback Lookout atop the 600-metre high Saddleback Mountain with views over the Illawarra Plains and escarpment and south to Nowra, Pigeon House Mountain and Coolangatta Mountain. Saddleback and Noorinan mountains provide an impressive backdrop to the city.

The Jamberoo Action Park, a mainly ride-orientated water-themed park, is situated 10 minutes inland of Kiama in the small town of Jamberoo.

West of Kiama in the green hills lies Jerrara Dam, built in the 1800s to supply water to the area. It is now a reserve.

North of the Minnamurra River is Killalea Recreation Area, a nature reserve on Bass Point. It is south of Shellharbour.

Kiama Council spent eleven years preparing the construction of the Kiama Coast Walk, a six-kilometre track extending from Loves Bay, north of Kiama, to Werri Lagoon, near Gerringong, south of Kiama. Some coastal land was declared public reserve to allow the public to walk through what was previously private property. The track was scheduled to open in October 2009 and was expected to be a popular drawcard for the public.

All content from Kiddle encyclopedia articles (including the article images and facts) can be freely used under Attribution-ShareAlike license, unless stated otherwise. Cite this article:
Kiama, New South Wales Facts for Kids. Kiddle Encyclopedia.