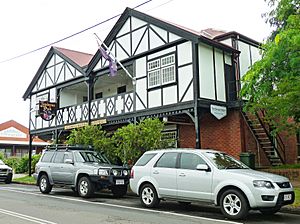 Jamberoo is a picturesque village approx 11 km inland from Kiama on the South Coast of New South Wales, Australia in the Municipality of Kiama. At the 2006 census, Jamberoo had a population of 935 people. The town's name is derived from an aboriginal word meaning 'track'.

It is well known for the Jamberoo Action Park, Jamberoo Hotel (Pub) and the local dairy-farming community. The Australian Illawarra Shorthorn cattle breed originated in here. It is the birthplace of politician Joseph Cullen.

European history in the valley began in the early 19th century when the cedar-cutters moved through the rainforests gathering this valuable timber. Pioneer settlers followed in the early 1820s with William Davis receiving the first land grant in 1821, followed by John Ritchie and John Cullen shortly afterwards.

Michael Hyam was a property owner by the late 1830s and he laid out the private village of Jamberoo in 1841. The Main South Coast Road formed the northern boundary of his village and at the western end of the town he gave out lots for Protestant Churches. The Presbyterian church of St Stephen stands on the original lot. The Methodist church around the corner in Wyalla St is now the Uniting Church and still hosts services, while the land given to the Church of England, now Anglican Church of Australia has been sold off and the Anglican Church is located north of Hyams Creek on Tates Hill. The old Presbyterian, Anglican and Uniting cemeteries are still located on the original lots, although they have been closed to burials since at least the 1920s

A sign outside the only fuel station in Jamberoo proclaims the town as the birthplace of co-operative dairy production in Australia. The first co-operative butter factory in Australia was begun at Jamberoo in 1884 adjacent to the old Main South Coast Road (now Jamberoo Road), 2 km from the Princes Highway and just west of Spring Creek and the monument marking the old toll gate. The location is better described as Kiama. An obelisk marks the spot.

In time, there were other butter factories: Woodstock and Wauchope which became the main factory in Factory Lane to the east of the town.

The valley of Jamberoo and the Minnamurra River is steep-sided and reasonably narrow. As a result, the town and valley is not subject to the extremes of weather that nearby Albion Park is. This is a significant observation because the climate data for the district is recorded at Albion Park. Local research (unverified) from Jamberoo weather stations suggests that wind speeds in Jamberoo are approximately half that experienced at Albion Park, while rainfall varies significantly depending on the altitude and proximity to the steep valley sides. Air temperature is not as extreme as recorded for Albion Park.

Jamberoo has a 'self-perception' of being a town of older folk and dairy farmers. However, research undertaken by the Anglican Church in Jamberoo reveals that the most significant age-group bands cover the age groups 40–49, followed closely by 10–19, in turn followed closely by 0–9. The "missing years" of 20–29 and 30–39 are significantly small by comparison, as are the 'golden years' from 50 and over.

Further research reveals that the "professional" is the major employment category for Jamberoo workers. Interestingly the vast majority of workers classed as "professional" are teachers and most of them are women. Their partners/husbands are very often trades people or supervisors in trade-related roles. Dairy farmers are a tiny minority as are retirees.

All content from Kiddle encyclopedia articles (including the article images and facts) can be freely used under Attribution-ShareAlike license, unless stated otherwise. Cite this article:
Jamberoo, New South Wales Facts for Kids. Kiddle Encyclopedia.