Gerringong is a town located about ten minutes drive south of Kiama, and about twenty minutes north of Nowra in the Illawarra region of New South Wales, Australia in the Municipality of Kiama. At the 2016 census, Gerringong had a population of 3,966. One theory says that the name derives from an Aboriginal word meaning "fearful place".

The first European settlers were red cedar cutters, who were first recorded as having visited and logged in the area in 1814. As in much of coastal New South Wales, the cleared land was used for dairy farming and cedar cutting died out, as the cedar trees disappeared. Dairy farming became the predominant primary industry and remains so to this day. Gerringong had a small boat harbour used for the export of cedar and dairy produce.

In 1824, Governor Brisbane reserved 600 acres (2.4 km²) for the present Gerringong township. In 1827, Michael Hindmarsh and his family were granted 640 acres (2.6 km²) and became the first settler in the Gerringong area. In 1829, Gerringong was incorporated into the postal system. Alne Bank homestead was built in 1851 for the Hindmarsh family, who still live there today and occasionally open it for inspection.

In 1854, a town plan for Gerringong was approved and the Governor proclaimed it a village. In 1872, the business area, Church of England church and some houses were destroyed by a bush fire. In 1893, the South Coast railway line was extended to Gerringong, leading to the end of shipping from the town. Telephone services were extended to Gerringong in 1913 and electricity in 1928.

In 1954, Gerringong Municipal District amalgamated with Kiama Municipal Council. The town water supply was connected in 1971, signalling an end to tanks attached to each house. Land along the coastal fringe tends to receive higher rainfall than the interior water catchment areas, which are often in rainshadow. In 2002, the town sewerage system was connected.

The population of Gerringong and the area is around 3,500 people. Others enjoy the seaside lifestyle but commute to work in Wollongong or Nowra and even Sydney. The main local industries are agriculture (including dairying and vineyards), tourism and retail trade.

The town has a modern primary school, a town hall (built 1948), a large retirement village and a tourist industry. Especially in the summer months, when visitors (mostly from Sydney and Canberra]) flock to the beaches, to enjoy swimming, surfing, fishing and the restaurants and cafés. There are two vineyards producing award-winning wines, one with cellar-door sales.

The Gerringong and District Historical Society runs the Heritage Museum, containing scale models of buildings, a photographic record of motor racing on Seven Mile Beach in the 1920s, and a display on the local dairying industry. The Society has a facility to do genealogy computer searches of a full database of Pioneer Family descendants, and also Birth, Death and Marriage records relating to the Gerringong area.

Gerringong railway station is served by NSW TrainLink's South Coast Line. Services are provided by diesel trains, which connect with electric trains to Sydney at Kiama. Local bus companies connect Gerringong to Kiama and Nowra on a daily basis, and interstate buses connect it with Sydney and Melbourne and all stops in between.

In 2012, a major Princes Highway upgrade commenced in Gerringong. The upgrade provides 7.5 kilometres of upgraded highway and includes two new interchanges with access to Gerringong and Gerroa. This major infrastructure project includes a new overpass over the Omega rail level crossing, major highway widening, additional exits, and safer on and off ramps. The $329 million upgrade was officially opened on 20 August 2015.

View of Rose Valley and (on the horizon) Gerringong 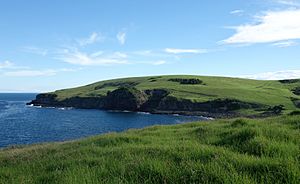 A coastal headland north of the town. The Kiama Coast Walk can be seen faintly along the hill.

The boundaries of the Gerringong District range from Mount Pleasant and Omega in the north, to Rose Valley, Willow Vale and Foxground in the west, and to Broughton Village, Toolijooa, Harley Hill, Gerroa and Seven Mile Beach in the south. In the centre of the area lies the town of Gerringong itself, and the nearby area of Werri Beach.

The Kiama and Gerringong area is marketed as "Where the Mountains Meet the Sea" by Kiama Council. A spur of Saddleback Mountain reaches down to Mt Pleasant to the north of Gerringong township, ending the Illawarra escarpment, which starts north of Wollongong. The area is famous for its coastline, which includes sea cliffs, beaches surrounded by rolling hills and countryside that stays green year-round.

The Princes Highway bypasses Gerringong township on its western edge, with two exits, one at Fern St and an underpass at Belinda Street, 2 km further south. Gerringong and Werri Beach were previously two separate localities, but have now grown together without any definitive boundary.

Werri Lagoon, which sometimes empties to the sea at the northern end of Werri Beach, used to naturally exit near the Gerringong Surf Club at the south end... until human intervention occurred in the 1960s. Bridges Road used to be access to a bridge which provided access to Werri Beach.

Werri Lagoon is now part of the Kiama Coast Walk, which stretches from Loves Bay, north of Kiama, to Werri Lagoon. The walking track extends for six kilometres and took eleven years to prepare and construct. It opened in October 2009.

Gerringong's Boatharbour, was extensively used for shipping timber and dairy produce in the 19th century. At one time a lengthy jetty existed, but it was destroyed in fierce storms in 1891. It was never rebuilt.

Gerringong's geology is basically basalt, emplaced in the Permian period.

Due to their close proximity, Gerringong has a climate similar to Kiama, which has an oceanic climate (Köppen climate classification Cfb) typical of southern and central New South Wales with warm summers and mild winters. Rainfall is spread relatively evenly throughout the year with the wettest months being in autumn and the driest in spring.

All content from Kiddle encyclopedia articles (including the article images and facts) can be freely used under Attribution-ShareAlike license, unless stated otherwise. Cite this article:
Gerringong, New South Wales Facts for Kids. Kiddle Encyclopedia.