Kurnell is a suburb in Sydney, in the state of New South Wales, Australia. It is 21.4 kilometres (13.3 mi) south of the Sydney central business district, in the local government area of the Sutherland Shire along the east coast.

Kurnell is the place where Captain James Cook landed on 29 April 1770, making first contact with the original inhabitants of the area, the Gweagal Aborigines whilst navigating his way up the East Coast of Australia on Endeavour. Captain Cook along with his crew stayed at Kurnell for a period of eight days. During their visit they collected botanical specimens, mapped the area and tried to make contact (unsuccessfully) with the indigenous population. When Cook reported back to England he said that the land was suitable for agriculture and was lightly wooded.

Captain Arthur Phillip, arriving in H.M. Armed Tender Supply on 18 January 1788, before the First Fleet arrived, following Cook’s advice. They began to clear land and dig wells, near modern-day La Perouse but a week later, Phillip decided to abandon the site and moved north to Sydney Cove at Port Jackson. 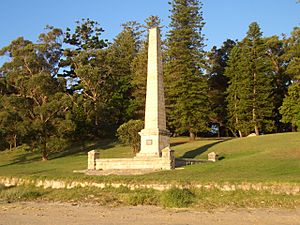 Cook's landing place is located on the north-eastern part of the national park. Sutherland Point is named in honour of a crew member, Scotsman Forby Sutherland, who died of tuberculosis during their eight days here and was buried on the shore. Cape Solander is named after Swedish botanist Daniel Solander, a colleague of Joseph Banks. Inscription Point was named by the Australian Philosophical Society in 1822 when they secured a plaque to the cliff face to mark the point of the Endeavour’s crew first landing.

The first land grant of 700 acres (283.3 ha) was made in 1815, to Captain James Birnie, who established Alpha Farm. 'Alpha' is the first letter in the Greek alphabet and the name was thought appropriate for the first farm in the area. In 1821 John Connell Junior was also granted land here and used it for timber getting. His father purchased Alpha Farm from Birnie and by 1842 the Connell family's estate was over one thousand acres (4 km²) in size. In 1860, Alpha Farm was sold to Thomas Holt (1811–88), who owned most of the land that stretched from Sutherland to Cronulla. The area was known as Birniemere for a time and Holtmere was once a locality. 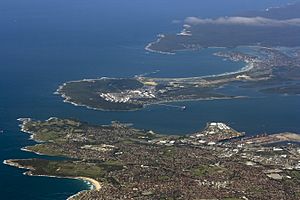 Before the 1920s, Kurnell was used by fishermen as schools of several varieties of fish inhabited the Botany Bay foreshore and the open sea. Fishermen built numerous huts and shacks which sheltered them for the weekend fishing. During the Great Depression, from the late 1920s, many severely affected low-income families took up residence there, in a shantytown.

On 16 December 2015 a tornado struck the New South Wales coast and produced high rainfall, hailstones and unusually strong winds. Kurnell was particularly hard hit at about 10:30 am with homes and businesses un-roofed, sewerage and electricity cut, two trucks tipped on their sides, and workers evacuated from Kurnell Refinery and the desalination plant, which was damaged. A "Wind gust of 213km/h recorded in Kurnell at 10:33am," was "the fastest wind speed recorded in NSW history". Injuries to people were only minor. The damage to Kurnell was calculated to have cost insurers A$206 million. Elsewhere on the same day roof damage occurred at Westfield Bondi Junction and in South Nowra. Thousands of homes lost power in Bulli, Thirroul and Woonona north of Wollongong. 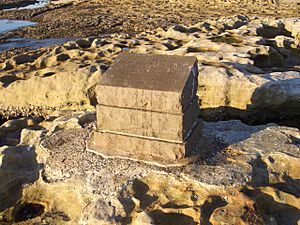 The northern part of the peninsula is a historic site known as Captain Cooks Landing Place with a number of memorials located here:

The Discovery Centre provides information and displays relics from the early days in Kurnell’s history. Endeavour Heights is a recreation area in the Botany Bay National Park. The Kurnell Lookout provides brilliant views of Botany Bay and the northern headland of Botany Bay at La Perouse.

Cape Solander is popular amongst whale watchers during the migration season.

Triathlons are held in Kurnell annually. There are running tracks through Botany Bay National Park, as well as running along the beach and swimming in the netted area of Silver Beach. This location also offers fishing, sailing, scuba diving and windsurfing activities. There is a free shuttle bus service during whale watching season, departing from the parking area of the office of the National Park.

Boat Harbour Beach is the location of a 4WD park. Access can be gained via Captain Cook Drive. People are permitted to drive on the beach with their 4WDs. An entry fee is required and one may drive along the beach for at least two kilometres.

All content from Kiddle encyclopedia articles (including the article images and facts) can be freely used under Attribution-ShareAlike license, unless stated otherwise. Cite this article:
Kurnell, New South Wales Facts for Kids. Kiddle Encyclopedia.