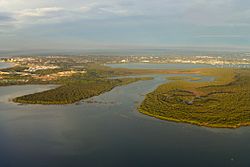 The Towra Point Nature Reserve is a protected nature reserve that is located in Sutherland Shire, southern Sydney, New South Wales, in eastern Australia. The 603-hectare (1,490-acre) reserve is situated on the southern shores of Botany Bay at Kurnell, within the Sutherland Shire. The reserve is protected under the Ramsar Convention as a wetland of international importance as an important breeding ground for many vulnerable, protected, or endangered species. The Towra Point Aquatic Nature Reserve is located in the surrounding waterways.

Kurnell was inhabited by the Dharawal people, and there are three middens and one relic that still remain today at the Towra Point Nature Reserve.

Captain Cook mapped Botany Bay when he landed in 1770, including Towra Point. Early European colonialists ran horses and cattle on Towra Point, despite the poor condition of the land for such a purpose. In 1827, "Towra Point" and "Towra Bay" were recorded as local names by the surveyor Robert Dixon. Another name known for the area was "Stinkpot Bay". In 1861, Thomas Holt bought Towra Point, and divided it into paddocks for grazing or growing corn. Sheep grazing was particularly disastrous, and many thousands of sheep died of footrot and are buried at Towra Point. In the late 1870s, Thomas Holt began oyster farming at Weeney Bay in Towra Point. In 1935, the Parks and Playgrounds Movement of NSW opposed an application to mine for shell at Towra Point. During World War II, a radar station was established, and a causeway built. In 1946, Towra Point was considered as a location for a second Sydney airport.

In the 1960s, movement began to preserve Towra Point led initially by the President of Sutherland Shire, Arthur Gietzelt, and Tom Uren, the then Federal Minister for Urban Affairs. In 1965 Ian Griffith, state MP for Cronulla, praised the idea, but was met by community backlash. In March 1969, the then Prime Minister, John Gorton ruled out Towra Point as a potential site for a second airport, citing community noise problems. The opening to Botany Bay was dredged in the 1970s to assist shipping, but this refracted the wave patterns in the bay, focusing them on Towra Point, causing erosion. The building of the revetment wall in Port Botany was also thought to contribute to the changed wave patterns. In 1974 and 1975, the waves off Towra were so strong that teens surfed there.

Following lobbying by Ray Thorburn, the reserve was bought by the Commonwealth in 1975, attempting to fulfil obligations to JAMBA, which would come into force in April 1981. This was the first time that the Australian Government had bought land for nature conservation purposes within a state. On 10 September 1979 the oil tanker World Encouragement spilled approximately 95 tonnes (105 short tons) of crude oil into Botany Bay. Mangroves at Quibray Bay, Weeney Bay and Towra Point were impacted – 100 hectares (250 acres) of mangroves were affected, and 4.4 hectares (11 acres) died.

In 1981, another oil spill occurred at the Matraville refinery, causing more damage to the mangroves. In 1982, Towra Point was officially made a nature reserve. In 1983 Towra was suffering from erosion – the Elephant's Trunk, a peninsula of Towra had shrunk to 3 metres wide. The seagrasses were also being eaten by sea-urchins – the population had exploded from 20,000 per hectare in 1979 to 80,000 by 1983. It was declared a Ramsar site (or wetland of international importance) in 1984, at the time meeting Ramsar criteria 1, 2, 3 and 6. In 2009, Towra Point met Ramsar criteria 2, 3, 4 and 8. In 1987, the Towra Point Aquatic Nature Reserve was created, covering 1,400 hectares (3,500 acres) in the waterways surrounding Towra Point. Towra Point Nature Reserve also attempts to meet the Federal government's obligations to CAMBA, which came into force in 1988.

In 1990, the Elephant's Trunk was eroded so much that the tip broke off into an island. By this time, Towra Beach was so eroded that trees that were part of the forest were "tumbling into the water". The Friends of Towra Point volunteer group was founded in February 1997 and they do such activities as bush regeneration, seed collection, vegetation surveys and habitat creation for the little tern. They also coordinate the annual Clean Up Australia Day activities at Towra Point. Habitat creation involves sandbagging the eroding Towra Lagoon, nest tagging, and clearing areas around nests.

In 2003, it was proposed to undertake beach nourishment at Towra Point, involving 60,000 cubic metres of sand. While this had an immediate negative effect on some amphipod species, they had recovered by 2005. In January 2004, 24 little tern were killed after picnickers and a dog accidentally landed on Towra Spit Island. In 2004, a A$1.5 million dredging project was undertaken to cut off Towra Spit Island from the rest of Towra Point to provide a fox-free environment. In around 2007, the La Perouse Aboriginal Community began sending trainees to work in the area for the National Parks and Wildlife Service as part of the "Towra Team", combining bush regeneration work with learning traditional Aboriginal cultural skills.

In 2010, artificial roosting posts were installed by the Office of Environment & Heritage to supplement the roosting habitat in the area. In the 2010 breeding season, 72 little tern fledged. In 2012, the site received a "Grey Globe" award of shame, given to Ramsar sites that are considered to be under threat. In 2013, the Botany Bay National Park and 800 hectares (2,000 acres) of land including Towra Point Nature Reserve were to be included on the State Heritage Register. 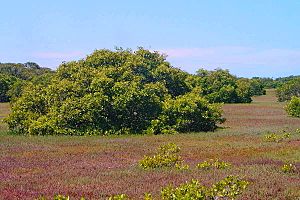 Saltmarsh and mangroves make up a large part of Towra Point Nature Reserve.

Towra Point, atop an ancient river delta deposit, has many distinct habitats – these diverse habitats are part of why Towra Point is a Ramsar site. The habitats of the reserve are:

In 2001, the mangrove forests of Towra Point were described as varying in width between tens and hundreds of metres and largely consisting of the grey mangrove Avicennia marina with the river mangrove Aegiceras corniculatum growing in patches along the edge of the forest closest to the landward edge.

Towra Point Nature Reserve is home to many endangered, vulnerable, protected and exotic species. This list is from the NSW Government's Environment and Heritage department website – a comprehensive listing, including numbers, scientific names, and protection status, can be found at this link. 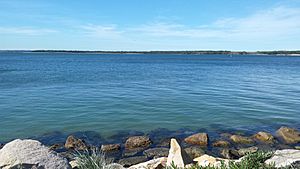 The ecosystem surrounding Towra Point has been impacted as a result of human interaction.

Looking west from the air over Towra Point

Humans can maximise the area of healthy, functioning intertidal wetlands by minimising their impacts and by developing management strategies that protect, and where possible rehabilitate these ecosystems at risk.

The following are positive ways of trying to protect or rehabilitate intertidal wetlands.

Management of the reserve

The traditional objectives for the management of wetland areas were built around the use of wetland resources for food, shelter and tools. Grey mangrove wood, for example, was used to make shields, shells were made into fishing hooks; and marine animals were used for food.

Care has been taken to develop management plans that are both realistic and flexible. They need to take into account scientific and technological advances, changing social and political attitudes and variations in the level of funding. Management plans also need to be consistent with Australia's international obligations under JAMBA, CAMBA and Ramsar.

As the Towra Point area is Ramsar listed, this attracts the operation of the federal Environment Protection and Biodiversity Conservation Act 1999 and regulations. Section 17B provides that a person is guilty of a criminal offence if (a) the person takes an action [see:s.523]; and (b) the action results or will result in a significant impact on the ecological character of a wetland; and (c) the wetland is a declared Ramsar wetland. Towra Point Nature Reserve is listed a component of Littoral Rainforest and Coastal Vine Thickets of Eastern Australia, a critically endangered ecological community under the EPBC Act.

All content from Kiddle encyclopedia articles (including the article images and facts) can be freely used under Attribution-ShareAlike license, unless stated otherwise. Cite this article:
Towra Point Nature Reserve Facts for Kids. Kiddle Encyclopedia.