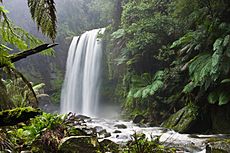 Efforts are being taken to preserve the natural characteristics of Hopetoun Falls, Australia while continuing to allow visitor access

Conservation biology studies the nature and status of Earth's biological diversity with the aim of protecting species and their habitats from excessive extinction rates that are caused by human actions. It is an interdisciplinary subject drawing on biological, physical and social sciences, economics, and the practice of natural resource management. The rapid decline of biological systems around the world means that conservation biology is often referred to as a "Discipline with a deadline". Conservation ecology addresses population dynamics issues associated with the small population sizes of rare species (e.g. minimum viable populations). It is the scientific study of the phenomena that affect the maintenance, loss, and restoration of biological diversity and the application of science to the conservation of genes, populations, species, and ecosystems.

In the 19th century, actions in the United Kingdom, the United States and certain other western countries emphasized the protection of habitat areas pursuant to visions of such people as John Muir and Theodore Roosevelt. Not until the mid 20th century did efforts arise to target individual species for conservation, notably efforts in big cat conservation in South America led by the New York Zoological Society. By the 1970s, led primarily by work in the United States under the Endangered Species Act along with Biodiversity Action Plans developed in Australia, Sweden, the United Kingdom, hundreds of specific species protection plans ensued. The Society for Conservation Biology[1] is a global community of conservation professionals dedicated to advancing the science and practice of conserving Earth's biological diversity.

Conservation biologists study trends and processes in the paleontological past to gain an understanding of the current context and issues related to species extinction. It is generally accepted that there have been five major global mass extinctions that register in the planets history. These include: the Ordovician (440 mya), Devonian (370 mya), Permian–Triassic (245 mya), Triassic–Jurassic (200 mya), and Cretaceous (65 mya) extinction spasms.

Presently the Earth is undergoing the Holocene Mass Extinction, an era of unprecedented number of species extinctions. Human influence over the Earth's ecosystems has been so extensive within the last 10,000 years, that scientists have difficulty estimating the total number of species lost in this era; that is to say the rates of deforestation, reef destruction, wetlands filling and other human acts are proceeding much faster than human assessment of the Earth's species. The latest Living Planet Report by the World Wildlife Fund for nature estimates that we have exceeded the bio-regenerative capacity of the planet requiring 1.5 earths to support the current demands placed on our natural resources stemming from biodiversity. 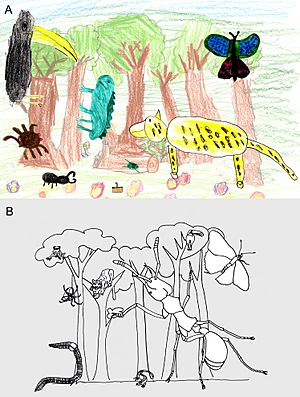 An art scape image showing the relative biomass representation in a rain forest through a summary of (A) child's perception compared with (B) a scientific estimate of the biomass. The size of the animal represents its biomass proportion. The child mental image places prominence on big cats versus actual prominence of social insects (ants)

There is substantial evidence and shocking statistics registering in all corners of biodiversity research indicating that we are truly experiencing the sixth major planetary extinction at a rate that has not occurred before. It is estimated that two-thirds of all mammal genera and one-half of all mammal species weighing 44 kilograms (97 lb) have gone extinct in the last 50,000 years. The Global Amphibian Assessment reports that amphibians are declining on a global scale faster than any other vertebrate group, with over 32% of all surviving species being threatened with extinction. The surviving populations are in continual decline in 43% of those that are threatened. Since the mid-1980's the actual rates of extinction have exceeded 211X rates measured from the fossil record.

The trend is similar in all other groups that are being monitored. For example, 23% of all mammals and 12% of all birds are Red Listed by the International Union for Conservation of Nature, meaning they too are threatened with extinction. There are serious concerns being hailed from other taxonomic groups that do not receive the same degree of attention as charismatic vertebrates, including fungi, lichen, plant and insect communities where the vast majority of biodiversity is represented. Insect conservation, in particular, is of pivotal importance for conservation biology. The value of insects in the global ecosystem market is enormous because they outweigh all other groups in their biomass, but this great ecological value is weighed down greatly by their perceived value in a society that oftentimes reacts negatively toward these aesthetically 'unpleasant' creatures.

The matter of ongoing species loss is made more complex by the fact that most of the Earth's species have not been described or evaluated. The IUCN has found that 23 percent of vertebrates, 53 percent of invertebrates and 70 percent of plants that have been evaluated are designated as endangered or threatened.

Many of the threats to biodiversity, including disease and climate change, are reaching beyond borders of protected areas, leaving them 'not-so protected' (e.g. Yellowstone National Park). Climate change, for example, is often cited as one of the more serious threats in this regard. Climate change is of special significance, because there is a feedback loop between species extinction and the release of carbon dioxide into the atmosphere.

The planets ecosystems store and cycle the vast proportion of global carbon stocks to regulate global atmospheric conditions. Unless the loss of species is halted, greenhouse gasses will continue to be released. Worldwide, the effects of global warming add a potentially catastrophic threat to global biological diversity; a 2004 study by Chris Thomas, Lee Hannah, et al. estimated that 15 to 37 percent of all species would become extinct by 2050.

"Human activities are associated directly or indirectly with nearly every aspect of the current extinction spasm."

Some of the most significant threats to biodiversity and ecosystem processes include: climate change, mass agriculture, deforestation, overgrazing, slash-and-burn, urban development, and pesticide use. This does not imply, however, that these human activities necessarily cause extinction and irreparable harm to our planets ecosystems. With conservation management and planning for biodiversity at all levels, from genes to ecosystems, it is possible for the human enterprise to coexist with nature.

Extinction rates are measured in a variety of ways. Conservation biologists measure and apply statistical measures of fossil records, rates of habitat loss, and measure a multitude of other variables such as loss of biodiversity as a function of the rate of habitat loss and site occupancy to obtain such estimates. The background extinction rate is estimated to be 1 species every few years. The present global extinction rate is approximately 100,000 times higher than the natural background rate (Meffe and Carroll, 1997). 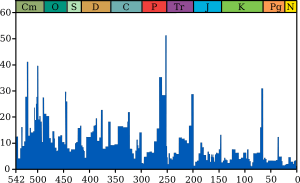 The five major extinction spasms measured by extinction levels in marine animal genera through time. Blue graph shows apparent percentage (not absolute number) of extinction during any given time interval

Systematic Conservation Planning is an effective way to seek and identify the most efficient and effective types of reserve design to capture or sustain the highest priority biodiversity values. Margules and Pressey (2000) identify six interlinked stages in the systematic planning approach:

Conservation biologists regularly prepare detailed conservation plans for grant proposals or as part of their organizations mandate to effectively coordinate and manage their plan of action and to identify best management practices (e.g. Chan et al., 2006). Systematic strategies generally employ the services of Geographic Information Systems to assist in the decision making process.

A pie chart image showing the relative biomass representation in a rain forest through a summary of child's perception's from drawings and artwork (left), through a scientific estimate of actual biomass (middle), and by a measure of biodiversity (right). Notice that the biomass of social insects (middle) far outweighs the number of species (right)

While most in the community of conservation science "stress[es] the importance" of sustaining biodiversity there is debate on how to prioritize and value genes, species, or ecosystems, which are all components of biodiversity. While the predominant approach to date has been to conserve or set priorities for 'biodiversity hotspots' where the number of species reign supreme, some scientists and conservation organizations, such as the Nature Conservancy, argue that it is more cost effective and socially relevant to invest in 'biodiversity coldspots'.

Conservation biologists trace the ethics that guide their work back to early spiritual philosophies, including the Tao, Shinto, Hindu, Islamic and Buddhist traditions. In the West, origins of concern for the destruction of the natural environment by man can be traced to Plato; however, modern roots of conservation biology can be found in the late 18th century Enlightenment period particularly in England and Scotland. A number of thinkers, among them notably Lord Monboddo, described the importance of "preserving nature"; much of this early emphasis had its origins in Christian theology. By the early 1800s biogeography was ignited through efforts of Von Humboldt, DeCandolle, Lyell and Darwin; their efforts, while important in relating species to their environments, fell short of actual conservation.

The term conservation came into use in the late 19th century and referred to the management, mainly for economic reasons, of such natural resources as timber, fish, game, topsoil, pastureland, and minerals, and also to the preservation of forests (see forestry), wildlife (see wildlife refuge), parkland, wilderness, and watersheds. Western Europe was the source of much 19th century progress for conservation biology, particularly the British Empire with the Sea Birds Preservation Act 1869; however, the United States began making sizable contributions to this field starting with thinking of Thoreau and taking form in the United States Congress passing the Forest Act of 1891, John Muir's work and the founding of the Sierra Club in 1895, founding of the New York Zoological Society in 1895 and establishment of a series of national forests and preserves by Theodore Roosevelt from 1901 to 1909.

In the early 20th century the New York Zoological Society was instrumental in developing concepts of establishing preserves for particular species and conducting the necessary conservation studies to determine the suitability of specific locations that are most appropriate as conservation priorities; the work of Henry Fairfield Osborn Jr., Archie Carr and Archie Carr III is notable in this era.

By the early 1970s national and international governmental agencies became more active in the conservation of biodiversity. Notably the United Nations acted to conserve sites of outstanding cultural or natural importance to the common heritage of mankind. The programme was adopted by the General Conference of UNESCO in 1972. As of 2006, a total of 830 sites are listed: 644 cultural, 162 natural. The first country to pursue aggressive biological conservation through national legislation was the USA, which passed back to back legislation in the Endangered Species Act (1966) and National Environmental Policy Act (1970), which together injected major funding and protection measures to large scale habitat protection and threatened species research.

By 1992 most of the countries of the world had become committed to the principles of conservation of biological diversity with the Convention on Biological Diversity; subsequently many countries began programmes of Biodiversity Action Plans to identify and conserve threatened species within their borders, as well as protect associated habitats.

The late 1990s saw increasing professionalism in the sector, with the maturing of organisations such as the Institute of Ecology and Environmental Management and, more recently, the Society for the Environment.

Since 2000 the concept of landscape scale conservation has risen to prominence, with less emphasis being given to single-species or even single-habitat focused actions. Instead an ecosystem approach is advocated by most mainstream conservationist, although concerns have been expressed by those working to protect some high-profile species.

The science of ecology has clarified the workings of the biosphere; i.e., the complex interrelationships among humans, other species, and the physical environment; moreover, the burgeoning human population, and associated agriculture, industry and its ensuing pollution have demonstrated how easily ecological relationships can be disrupted.

All content from Kiddle encyclopedia articles (including the article images and facts) can be freely used under Attribution-ShareAlike license, unless stated otherwise. Cite this article:
Conservation biology Facts for Kids. Kiddle Encyclopedia.