Glacier Point is a viewpoint above Yosemite Valley in the U.S. state of California. It is located on the south wall of Yosemite Valley at an elevation of 7,214 feet (2,199 m), 3,200 feet (980 m) above Half Dome Village. The point offers a superb view of several of Yosemite National Park's well-known landmarks, including Yosemite Valley, Yosemite Falls, Half Dome, Vernal Fall, Nevada Fall, and Clouds Rest. Between 1872 and 1968, it was the site of the Yosemite Firefall.

The extreme point of the promontory of Glacier Point is wholly bare, but on the slopes below, in the hollow to the west, and on the wooded slope above, glacial material is abundant. Its glacial origin is definitely proved by the presence in it of rocks derived from Little Yosemite Valley and the Sierra Nevada.

There are three types of glacially-deposited rock at Glacier Point: 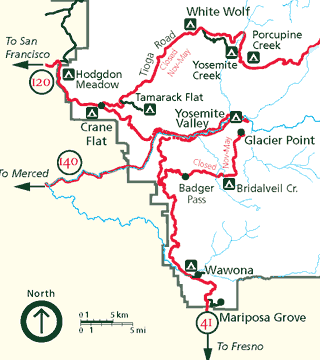 Location of Glacier Point within Yosemite

Glacier Point can also be reached via the Four Mile Trail, which ascends the 3,200 feet (980 m) in 4.6 miles (7.4 km). This moderate to strenuous trail can provide access to Glacier Point when the Glacier Point Road is closed. Note, however, that the trail can be extremely hazardous when covered with snow or ice, so it is usually closed by the Park Service from December through May. Another 8.2 miles (13.2 km) trail runs from Glacier Point down to the Valley, via the Panorama Trail, past Nevada and Vernal Falls.

Hikers may also access trailheads to the Panorama trail and the Pohono trail.

All content from Kiddle encyclopedia articles (including the article images and facts) can be freely used under Attribution-ShareAlike license, unless stated otherwise. Cite this article:
Glacier Point Facts for Kids. Kiddle Encyclopedia.