The striped marsh frog or brown-striped frog (Limnodynastes peronii) is a predominantly aquatic frog native to coastal Eastern Australia. It is a common species in urban habitats.

Females may reach a length of 75 millimetres (3.0 in) and males 70 millimetres (2.8 in). They are a shade of brown on the dorsal surface. This colour can be light or dark; they can also be a red-brown on the dorsal surface. There are distinct darker stripes running down the frogs back (giving this species its name), there is normally a paler mid-dorsal stripe running down the back. There is a black "mask" that runs from the nostril, through the eye and down to the shoulder. This "mask" is followed by a thick light golden line that runs underneath the "mask" and terminates at the end of the mouth. Breeding males develop thick arms, these are used in "wrestling" matches with other frogs, the throat of males is yellow in colour. The belly is white.

It is distributed from the southern parts of the Cape York Peninsula in North Queensland, through all of coastal New South Wales, Southern Victoria to southeastern South Australia and Northern Tasmania. Although this species is very common in coastal NSW, it is not common in Tasmania and listed as rare. 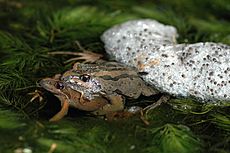 This species is the most frequently encountered frog on the east coast. They are normally the first frog to colonise a garden frog pond and are often victims of backyard swimming pools. They will inhabit ponds, roadside ditches, creeks, dams, flooded areas and any other available water body. They are tolerant of polluted water. Males call while floating in water from a hidden area in vegetation. They make a "knock" call as if you were to hit a piece of timber with a hammer, during all months of the year (particularly spring-autumn). This call is familiar to anyone in Sydney who has a garden pond.

The breeding season is from late winter to early spring. Eggs are laid in a foamy nest and tadpoles can take 8–12 months to develop. Pale brown, they can be up to 6.5 cm long.

It is kept as a pet, in Australia this animal may be kept in captivity with the appropriate permit.

All content from Kiddle encyclopedia articles (including the article images and facts) can be freely used under Attribution-ShareAlike license, unless stated otherwise. Cite this article:
Striped marsh frog Facts for Kids. Kiddle Encyclopedia.