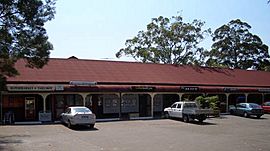 Bonnet Bay is a suburb in southern Sydney, in the state of New South Wales, Australia that is located 29 kilometres (18 mi) south of the Sydney central business district in the local government area of the Sutherland Shire. Its postcode is 2226, which it shares with neighboring Jannali and Como. Bonnet Bay is located on the eastern bank of the Woronora River, which flows north into the Georges River.

The suburb draws its name from the adjacent bay of the same name.

The original name proposed for the area was Kirkby. A cave in the area was known as 'The Bonnet' because it was shaped like a bonnet and this was adopted for the name of the bay on the Georges River. The Geographical Names Board decided to name the area Bonnet Bay in 1969.

Burnum Burnum Reserve lies between Bonnet Bay, Como, Jannali, Sutherland and Woronora. It extends for about two kilometres. The reserve effectively surrounds Bonnet Bay, with the only two roads leading into the suburb, cutting through it. Burnum Burnum Reserve hosts some plants that are almost extinct and are protected. However, it also represents a constant fire threat to Bonnet Bay, most notably manifesting in the 1994 Como bushfires. The reserve was originally known as "Jannali Reserve" but the name was changed in 2005 to commemorate Burnum Burnum, the prominent aboriginal Sutherland Shire resident. A small plaque details his speech in England at Australia's bicentenary in 1988.

A noteworthy feature of this suburb is that all of the streets are named after American Presidents. Washington Drive runs through the length of the suburb and is twice split into one-way 'Upper' and 'Lower' sections due to the steep hills it runs across. Nixon is the last President a street is named after. The only street not named after an American president is Tudar Road, which originates in NW Sutherland and cuts through Burnum Burnum reserve to enter Bonnet Bay.

Bonnet Bay has a boat ramp, a number of picnic and recreational areas, including a cricket oval, soccer oval, two netball courts and two baseball fields.

Bonnet Bay was well known in southern Sydney for its extensive displays of Christmas decorations and lights during the festive season, though the tradition reached its peak in the mid-1980s and has since spread to other areas throughout the Sutherland

All content from Kiddle encyclopedia articles (including the article images and facts) can be freely used under Attribution-ShareAlike license, unless stated otherwise. Cite this article:
Bonnet Bay, New South Wales Facts for Kids. Kiddle Encyclopedia.