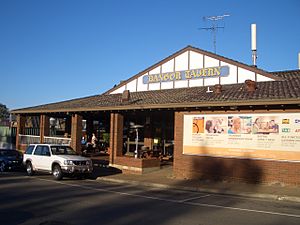 Bangor is a suburb in southern Sydney, in the state of New South Wales, Australia. Bangor is located 28 kilometres south of the Sydney central business district, in the local government area of the Sutherland Shire in the area commonly called Menai. Bangor sits south of the Georges River and to the west of the Woronora River.

The name 'Bangor' was selected in 1895 by the land's owner, a farmer named Owen Jones, after his birthplace Bangor in Wales. To avoid confusion with Bangor in Tasmania, the Postmaster General's Office changed the suburb name to Menai in 1910. Another Australian Bangor is located in South Australia. Menai Bridge is a town opposite the original Bangor, on the Menai Strait in Wales. When Menai expanded, the eastern section was renamed Bangor in 1976.

As part of the modern development of Bangor, the streets were all named with an Aboriginal theme.

The main road running through Bangor and Menai is Menai Road. The Bangor Bypass was completed in February 2005 to alleviate traffic in the area.

The closest train station is Sutherland, on the Illawarra line; although Padstow on the East Hills/Airport line is also frequently used. Veolia buses service Bangor from both these train stations.

A family friendly cycle way runs from Sutherland to Padstow through Bangor, which links up with the broader Sydney cycle way.

Bangor has tennis courts and two sporting ovals (Akuna Oval and Billa Oval) named after the roads they are situated on. Bangor is home to the Bangor Brumbies soccer club and its home field is Billa Oval. The Bangor Scout Group was established in 1986 with a Scout Hall in Ross Reserve in Pyree Street and caters for youth aged from 6 to 26 years old.

The nearby rivers and extensive bush areas are popular with the locals and offer a variety of outdoor activities including bush walking, mountain bike riding, canoeing, kayaking, rowing, fishing.

All content from Kiddle encyclopedia articles (including the article images and facts) can be freely used under Attribution-ShareAlike license, unless stated otherwise. Cite this article:
Bangor, New South Wales Facts for Kids. Kiddle Encyclopedia.