Padstow, a suburb of local government area City of Canterbury-Bankstown , is located 22 kilometres south-west of the Sydney central business district, in the state of New South Wales, Australia, and is a part of the South-western Sydney region. It is the easternmost suburb in Greater Western Sydney, bordering the Southern Sydney region to the east.

Padstow is a mostly residential suburb bounded on the north by Bankstown and on the east by Salt Pan Creek, which is a stream feeding into the Georges River. The M5 South Western Motorway traverses the northern end of the suburb, which is also the location of a number of light industrial facilities. 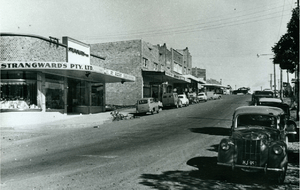 Padstow was first named Padstow Park Estate after the town of Padstow in Cornwall, England. The Cornish Padstow's name means "the holy place of St Petrock" (not to be confused with St Patrick, as they are spelled and pronounced differently), an important Cornish saint. The estate included the grants of Simon McGuigan (130 acres), Joseph Cunningham 50 acres (20 ha) and Michael Conroy 40 acres (16 ha) . Timber-getting and farming were the main activities here. The Padstow Park post office opened in 1927 and the first school opened in January 1929. The railway station opened on 21 December 1931, which encouraged development in the area, especially after World War II. The suburb’s name was changed to Padstow in 1939.

Padstow railway station is on the Sydney Trains Airport & South Line, west of Riverwood and east of Revesby. There are several bus routes that pass through Padstow, all operated by Transdev NSW. These services developed from routes established by McVicar's Bus Services, which was dissolved in 1978. The 927 travels from One Tree Point (the easternmost tip of Padstow Heights) to Padstow. The 962 travels from Bankstown to Miranda through Padstow, Illawong, Menai and Sutherland. The S5 travels from Milperra to Padstow. Two Metrobus routes travel through Padstow: M91 and M92. M91 travels from Parramatta to Hurstville, via Granville, Chester Hill, Bankstown, Padstow and Peakhurst. M92 travels from Parramatta to Sutherland via Lidcombe, Bankstown, Padstow and Menai.

All content from Kiddle encyclopedia articles (including the article images and facts) can be freely used under Attribution-ShareAlike license, unless stated otherwise. Cite this article:
Padstow, New South Wales Facts for Kids. Kiddle Encyclopedia.