Milperra, a suburb of local government area Canterbury-Bankstown Council, is located 24 kilometres west of the Sydney central business district in the state of New South Wales, Australia, and is a part of the South Western Sydney region.

Milperra is an Aboriginal word for a gathering of people. The land at Milperra was originally owned by George Johnson Jr. After World War I, returning soldiers established poultry farms and vegetable gardens in the area. The area commonly known as Thorns Bush, became officially known as Bankstown Soldier Settlement in 1917. Many streets in the area are named after World War 1 battles and officers.

The Milperra College of Advanced Education was established in 1974, which became the Bankstown campus of the University of Western Sydney in 1989. 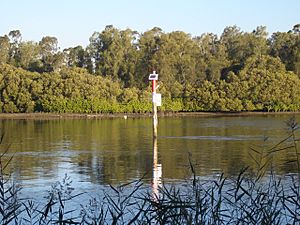 Milperra sits on the bank of the Georges River and features a number of parks and reserves along the river, including Deepwater Park, Bankstown Golf Course and Vale of Ah Reserve.

Milperra Road is a major road on the northern border which links to Newbridge Road and Moorebank, on the western side of the Milperra Bridge, over the Georges River. The M5 South Western Motorway runs along the southern border and Henry Lawson Drive is the other major road through the area.

All content from Kiddle encyclopedia articles (including the article images and facts) can be freely used under Attribution-ShareAlike license, unless stated otherwise. Cite this article:
Milperra Facts for Kids. Kiddle Encyclopedia.