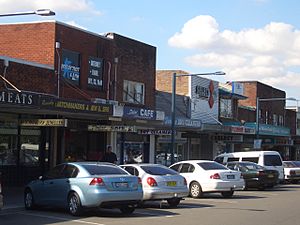 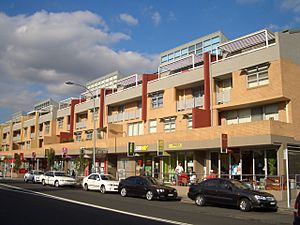 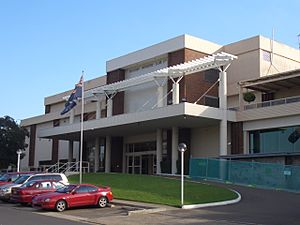 Revesby, a suburb of local government area Canterbury-Bankstown Council, is located 22 kilometres south-west of the Sydney central business district, in the state of New South Wales, Australia, and is a part of the South-western Sydney region.

Revesby is mostly a residential suburb, which was developed as part of Sydney's post-war urban sprawl, and contains many modest freestanding bungalows built from asbestos cement sheeting (fibro). Revesby is bounded on the north by Canterbury Road and the suburbs of Bankstown and Condell Park, on the south by Revesby Heights and Picnic Point, on the Georges River, on the west by Panania, and on the east by Padstow.

Revesby was named in 1913 in honour of Sir Joseph Banks, the famous botanist who sailed with Captain James Cook on the Endeavour, when he reached the east coast of Australia in 1770. Banks had inherited his father’s estate of Revesby Abbey, in Lincolnshire, England, so he was known as the Squire of Revesby. He is also commemorated in the Sir Joseph Banks High School in Turvey Street.

George Johnston, an officer of marines who had arrived on the First Fleet was granted land in this area in 1804. His wife Esther Julian, who had arrived as a convict on the same ship in 1788 was granted 570 acres (2.3 km2) in 1813. The earliest landowners did not reside in the area. The only mansion built in the early days was 'The Pah' on Tompson Road. It was built in 1896-97 by Samuel John Hales on 14 acres (57,000 m2) that had been purchased from the Weston estate. The property was subdivided in 1926 but the house remains.

The first school opened as Bankstown South in 1896; now known as Revesby Public School. The railway station opened on 21 December 1931. The local post office opened in 1955.

A major attraction of Revesby is the Revesby Workers' Club. Originally opened in 1962, today it has over 50,000 members, with extensive modern facilities. The most recent upgrades were completed in 2000, with further extensions currently under construction expected to significantly change the club, making it one of the largest in the state. The recent addition of a multi-level car park as well as another supermarket in close proximity has greatly increased access for locals for entertainment and products.

An Arts and Crafts Fair is held every month at Abel Reserve.

Revesby railway station is on the Airport, Inner West & South Line of the Sydney Trains network. During the morning and afternoon peak, express services run via Sydenham and Redfern.

All content from Kiddle encyclopedia articles (including the article images and facts) can be freely used under Attribution-ShareAlike license, unless stated otherwise. Cite this article:
Revesby, New South Wales Facts for Kids. Kiddle Encyclopedia.