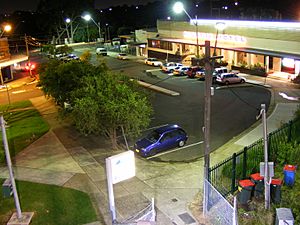 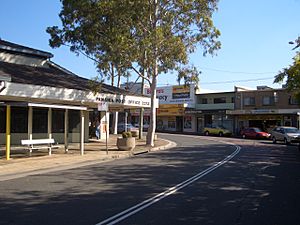 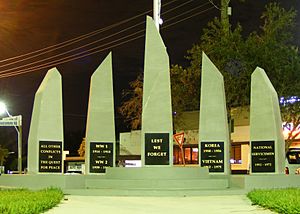 Panania, a suburb of local government area Canterbury-Bankstown Council, is located 23 kilometres inner south-west of the Sydney central business district, in the state of New South Wales, Australia, and is a part of the South-western Sydney region. The postcode is 2213, which it shares with adjacent suburbs East Hills and Picnic Point.

Panania is bounded on the north by the M5 South Western Motorway and the suburb of Milperra. Picnic Point, to the south, features parklands along the Georges River. East Hills is the suburb to the west and Revesby is located to the east.

The name Panania was on the original list of stations proposed for the Tempe-East Hills railway line in 1929. Prior to this, Panania was part of what was generally known as the East Hills district. Panania is an Aboriginal word meaning sun rising in the east and shining on the hills. An alternative theory is that the name may be a derivation of "Pannonia", which was an ancient province of the Roman Empire southeast of the Danube River. During the construction of the railway line the name Nioka was used for the station which is an Aboriginal word meaning the green hill. Other names suggested for suburb were Linden Park and Elmswood.

The arrival of the railway in 1931 stimulated the development of the East Hills district. Prior to this, the district was rural. There was a soldiers' settlement at Milperra which consisted mostly of poultry and horticultural enterprises. The only public transportation was bus service to Bankstown railway station on the Bankstown line from various locations throughout the district, which posed a great inconvenience to people who needed to visit the Sydney CBD for work.

Development began apace after World War II. The Australian Legion of Ex-Servicemen and Women sponsored the mass production of housing at Panania beginning from 1946 with the construction of 34 houses.

St Christopher's Catholic Church on Tower Street was originally the Panania Star cinema. Panania North Public School, a short two block walk on the northern side of the railway line, became a demonstration school in the late 1970s so that trainee teachers from newly established, Milperra College of Advanced Education, could observe teachers at work.

Panania railway station is on the Airport, Inner West & South Line of the Sydney Trains network. Parts of Panania are serviced by buses operated by Transdev NSW, generally following the routes established by McVicar's Bus Services.

The East Hills railway line, which originally terminated one stop away at East Hills divided the suburb into two distinct precincts. During the 1980s, the railway line was extended with a rail bridge over the Georges River to Campbelltown. This had the effect of raising Panania's suburban status as it was no longer second last on the line, but comfortably midway.

Panania is mostly a residential suburb, which was developed after World War II and originally contained many modest freestanding bungalows built from asbestos cement sheeting (commonly known as fibro). Today, most of these houses have been rebuilt as larger residences or two-storey duplex houses.

All content from Kiddle encyclopedia articles (including the article images and facts) can be freely used under Attribution-ShareAlike license, unless stated otherwise. Cite this article:
Panania Facts for Kids. Kiddle Encyclopedia.