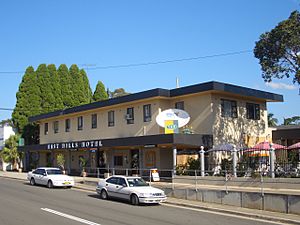 East Hills, a suburb of local government area Canterbury-Bankstown Council, is located 26 kilometres south-west of the Sydney central business district, in the state of New South Wales, Australia, and is a part of the South-western Sydney region.

East Hills was the name used to describe the whole area south of Bankstown to the Georges River and east to The River Road. George Johnstone (1790–1820) was granted 500 acres (2.0 km2) here in 1804 and called it New Jerusalem. It was west of The River Road between Bransgrove and Tomson Streets. Robert Gardiner a tenant on the property called his farm East Hills, possibly after the region of that name near Liverpool, England and since this area is close to another Liverpool. In 1828 Thomas Graham was granted 640 acres (2.6 km2), south of Johnston’s land, which he sold to Charles Tompson in 1835. The area to the west was bought by George Nicholas Weston in 1838.

In 1893, the area was subdivided and named East Hills after the farm. The railway line was opened in 1931 and East Hills was the terminating station. This line was extended in 1987 to a new station at Holsworthy and connected to the Main South Line at Glenfield and on to Campbelltown.

According to the 2011 census, there were 3,274 residents in East Hills. Most residents were Australian-born (73.4%) and the most common ancestries were Australian 26.7%, English 23.1%, Irish 7.8% and Scottish 5.3%. Major industries of employment included School Education 5.2%, Cafes, Restaurants and Takeaway Food Services 3.5%, and Legal and Accounting Services 2.9%.

All content from Kiddle encyclopedia articles (including the article images and facts) can be freely used under Attribution-ShareAlike license, unless stated otherwise. Cite this article:
East Hills, New South Wales Facts for Kids. Kiddle Encyclopedia.