Campbelltown is a suburb and major centre in the metropolitan area of Sydney, New South Wales, Australia. It is located in Greater Western Sydney 50 kilometres (31 mi) south-west of the Sydney central business district. Campbelltown is the administrative seat of the local government area of the City of Campbelltown. It is also acknowledged on the register of the Geographical Names Board of New South Wales as one of only four cities within the Sydney metropolitan area.

Campbelltown gets its name from Elizabeth Campbell, the wife of former Governor of New South Wales Lachlan Macquarie. Originally called Campbell-Town, the name was later simplified to the current Campbelltown.

The area that later became Campbelltown was inhabited prior to white settlement by the Tharawal people. Not long after the arrival of the First Fleet in Sydney in 1788, a small herd of six cattle escaped and weren't seen again by the British settlers for seven years. They were spotted, however, by the Tharawal people. In a rock art site called Bull Cave near Campbelltown, they drew a number of cattle with pronounced horns. The Tharawal described the cattle to British explorers and in 1795 the British found a herd of around 60 cattle grazing in the area now known as Camden.

The colonial administration was keen for the herd to establish itself so forbade killing of the cattle or settlement in the area. But John Macarthur, who wanted to establish sheep in the colony, took a liking to the prime grazing land. He convinced the British government to overrule the local administration and grant him 5,000 acres (20 km2) just south of the Nepean River in 1805. Four years later a number of other grants were made to farmers between Camden and Liverpool.

The Tharawal initially worked with the local farmers but a drought in 1814 led to large numbers of neighbouring Gandangara people moving into the area in search of food. Tensions developed between the British and the Gandangara leading to skirmishes and a number of deaths on each side. Governor Macquarie felt a permanent settlement would lead to order in the area and so Campbell-Town was born in 1820.

Development of the town was slow particularly after the departure of Macquarie, and it wasn't until 1831 that residents took possession of town land. However, it was during this period that Campbelltown's most famous incident occurred. In 1826, local farmer Frederick Fisher disappeared. According to folklore, his ghost appeared sitting on a fence rail over a creek just south of the town and pointed to a site where his body was later found to be buried. In memory of the incident, the Fisher's Ghost festival is held each November in Campbelltown.

Campbelltown's population increased steadily in the decades following. The southern rail line was extended to Campbelltown in 1858, leading to further development, and in 1882, Campbelltown Council was established allowing municipal works to occur in earnest. Campbelltown became the first country town in New South Wales to have piped water in 1888 and in the period between the World Wars, a local power station was built to supply electricity to residents.

Campbelltown was designated in the early 1960s as a satellite city by the New South Wales Planning Authority, and a regional capital for the south west of Sydney. There was extensive building and population growth in the intervening time and the government set aside land surrounding the township for public and private housing and industry.

Campbelltown has a humid subtropical climate (Köppen climate classification: Cfa) with mild to cool winters and warm to hot summers. 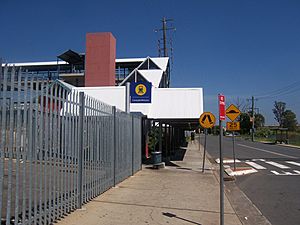 Campbelltown lies on the main road and rail links from Sydney to the south-west. The M5 South Western Motorway links Campbelltown north to Liverpool, Sydney Airport and Sydney CBD and south to Goulburn and Canberra. 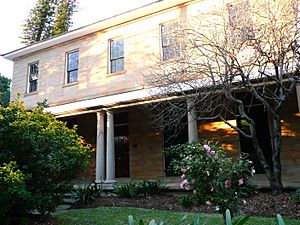 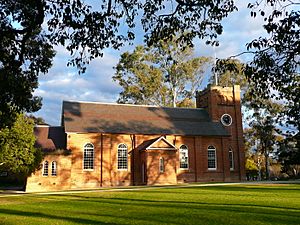 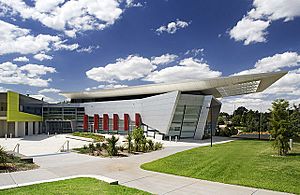 The Campbelltown Arts Centre, situated just south of the main town centre features a 180-seat performance space, exhibition galleries and workspaces. Outside is a sculpture garden and a Japanese Gardens and Teahouse that was a gift from Campbelltown's sister city Koshigaya in Japan.

The Fisher's Ghost Festival is an annual festival held in recognition of Frederick Fisher, an emancipated convict who owned farming land in Campbelltown. Legend has it that Fisher appeared to local man John Farley as a ghost after being murdered by George Worrall, his friend and neighbour, over a land dispute. An annual parade through Campbelltown's main street, Queen Street, is held each November, and a carnival including fairground rides and other entertainment is held at Bradbury oval, a local sports ground. Over a period of two weeks many activities take place, including the Fisher's Ghost Fun Run, the Fisher's Ghost Art Award and the Street Party which was formerly known as the Mardi Gras.

Campbelltown is home to two local radio stations, 2MCR and C91.3FM. The two local newspapers are the Campbelltown-Macarthur Advertiser and the Macarthur Chronicle. 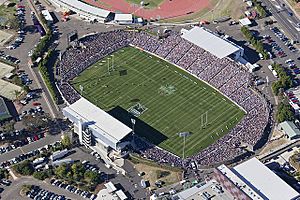 Campbelltown Sports Stadium from above.

Campbelltown is very well known for its strong sporting culture. This includes Rugby League, Cricket, Athletics, Soccer and Australian Rules Football. Campbelltown has produced many professional athletes who have represented Australia at Olympic level. Its leading sporting team is the Wests Tigers who play in the National Rugby League competition. The Wests Tigers are a merger of two foundation clubs of the old New South Wales Rugby League premiership, the Western Suburbs Magpies and the Balmain Tigers. As such, they play some of their home games at Campbelltown Stadium in neighbouring Leumeah and others at Leichhardt Oval. The Magpies still exist as a stand-alone team in the lower tier competition, the New South Wales Cup.

All content from Kiddle encyclopedia articles (including the article images and facts) can be freely used under Attribution-ShareAlike license, unless stated otherwise. Cite this article:
Campbelltown, New South Wales Facts for Kids. Kiddle Encyclopedia.