Picnic Point, a suburb of local government area Canterbury-Bankstown Council, is 23 kilometres south-west of the Sydney central business district, in the state of New South Wales, Australia. It is a part of South-western Sydney region . Picnic Point is a residential suburb on the northern bank of the Georges River. 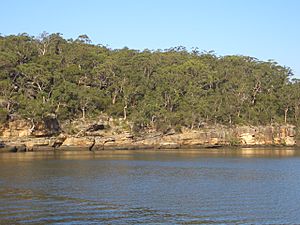 Picnic Point was the name given to the geographical feature on the Georges River. The suburb was originally part of East Hills, which stretched south from Bankstown to the river and east to The River Road.

During World War II, Picnic Point National Park was the location of a remote receiving station and operations bunker that was owned and operated by the RAAF. This facility was used in conjunction with two other facilities, one of them located in Bankstown, the Bankstown Bunker, which was RAAF headquarters at the time and the other in Bass Hill which was a transmitting station in Johnston Road. The location of the remote receiving station in Picnic Point is now located under the Transgrid South Sydney electricity sub station.

Picnic Point features a number of parks and reserves along the river, including the Georges River National Park. As the suburb’s name suggests, the area is popular with picnickers. The boat ramps provide access to the river for boating and watersports such as waterskiing and wakeboarding.

All content from Kiddle encyclopedia articles (including the article images and facts) can be freely used under Attribution-ShareAlike license, unless stated otherwise. Cite this article:
Picnic Point, New South Wales Facts for Kids. Kiddle Encyclopedia.