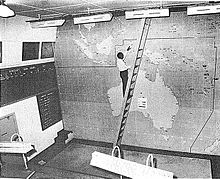 The Bankstown Bunker was a top secret Royal Australian Air Force base that was used during the Second World War. During the war it was Australia's main air defence base. It is no longer in use. The bunker is buried underneath a public park in the suburb of Condell Park in the City of Bankstown, which is in the state of New South Wales, Australia. It is still possible to go into the bunker through a secret passageway.

Inside one of the bunker hallways 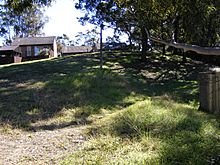 The bunker is under this reserve in Taylor St. 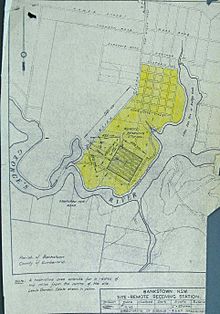 The Bankstown bunker is a three-story building that was mostly underground. It was secretly used during the Second World War by the Australian air force. Builders started to build the bunker in 1942. Workers and volunteers began to work inside the bunker in January 1945. It was called the Sydney "Air Defence Headquarters" and replaced another secret air force base that was in a secret tunnel. This was the Number One Fighter Sector Headquarters underneath St. James train station in Sydney. After that, it was moved to a picture theatre in Bankstown called the Capital Hall. The main job for the people who worked in the bunker, was to track all planes in the eastern area of the South West Pacific. Some of the people who worked in the bunker were from the No.2 Volunteer Air Observer Corps (VOAC), The Women's Auxiliary Australian Air Force and a few members of the Royal Australian Air Force and the United States Army Air Forces. Workers worked in the bunker 24 hours a day seven days a week in shifts called "Flights". The people who worked inside the bunker traveled to work in buses with tinted windows. Everyone that worked in the bunker had to receive special training.

At the end of the war, the bunker was no longer used and people forgot about it. In 1971 it was rediscovered by a reporter who worked for a local newspaper in the area. In 1972 the bunker was set on fire. In 1976 houses were built over part of the building, whilst the main part is underneath a public park.

The bunker was built in the same fashion as the underground Operations rooms of wartime England, which planned Britain's air defence fighter plane attacks on the invading German Luftwaffe.

The bunker walls were 1.5 metres thick and it was almost bomb proof. It had all the latest equipment of the time to allow it to run as a top secret defence base. It had its own code room, plotting rooms, two escape tunnels, radio transmitter room, kitchen, dining area, bathrooms and bedrooms. In the center of the bunker was a large operations room. This was a large room about two stories high. It was the control centre for all air force missions in the Pacific area. The room also had a big map of the South West Pacific theater of World War II. The bunker also had its own generator, air conditioning and switchboards which directed fifty telephone lines. The telephone lines went to various locations including radar stations and VAOC lookout posts which reported aircraft locations to the bunker. There are rumours of a tunnel running from the bunker to an unknown location.

There is a small park at the end of Taylor Street. In this park, there is a large hill that looks totally out of place. It is under this hill that the bunker has been buried. It is still possible to get in through a secret door.

Other bunkers in Bankstown

There is another bunker in Bankstown. This one is called a "Remote Receiving station" not much is known about its history. It was in Picnic Point National Park, near the South Sydney Power station, People who live in the area say that it is still there. There are many other rumours of bunkers in the Bankstown area, such as under an electricity block house on the corner of Milpera road and Henry Lawson Drive, a demolished bunker under Condell Park High School.

The Bankstown Bunker on TV

All content from Kiddle encyclopedia articles (including the article images and facts) can be freely used under Attribution-ShareAlike license, unless stated otherwise. Cite this article:
Bankstown Bunker Facts for Kids. Kiddle Encyclopedia.