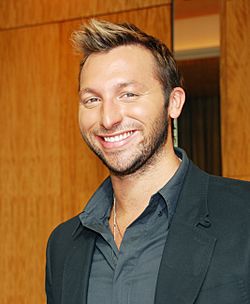 Ian Thorpe (born 13 October 1982 in Sydney, New South Wales) is an Australian swimmer. He won five gold medals at Olympic Games. He was the only swimmer who has won six gold medals in one World Championships (which he did in 2001) until Michael Phelps won seven in 2007. He is known for having large feet. At the age of 14, he became the youngest male ever to represent Australia,

At the age of 14, he became the youngest male ever to represent Australia, his athletic achievements made him one of Australia's most popular athletes, and he was recognised as the Young Australian of the Year in 2000.

After the Athens Olympics, Thorpe took a year away from swimming, scheduling a return for the 2006 Commonwealth Games. However, he was forced to withdraw due to illness. Subsequent training camps were interrupted, and he announced his retirement in November 2006. In 2014, he was presented with a Doctor of Letters from Macquarie University in recognition of his contribution for the sport, philanthropy and Indigenous rights.

Thorpe's success has been attributed to his work ethic, mental strength, powerful kick, ability to accelerate and a physiology suited to swimming. This led former Australian head coach Don Talbot to label him as "the greatest swimmer the world has seen". Thorpe was known for using his trademark six-beat kick to power away from his rivals in the closing stages of races, the effectiveness of which was attributed to his unusually large size 17 feet.

Following his retirement, head coach of the US men's swimming team Bob Bowman—who also mentors Michael Phelps—called Thorpe "the greatest middle-distance swimmer of all time and...the greatest relay swimmer I have seen". Bowman further cited Thorpe's ability to raise the profile and popularity of swimming, noting that Phelps' public image was modelled on that of the Australian. Australian Olympic Committee President John Coates stated that "In 50 years from now Australians will still marvel at the feats of Ian Thorpe". Dawn Fraser, the first of only two swimmers to win the same Olympic event three times, said that Thorpe was the "greatest [freestyle] swimmer in the world".

All content from Kiddle encyclopedia articles (including the article images and facts) can be freely used under Attribution-ShareAlike license, unless stated otherwise. Cite this article:
Ian Thorpe Facts for Kids. Kiddle Encyclopedia.