Ultimo is an inner-city suburb of Sydney, New South Wales, Australia. Ultimo is located 2 kilometres south-west of the Sydney central business district in the local government area of the City of Sydney.

Broadway is a locality around the road of the same name, which is located on the borders of Ultimo, Chippendale and Glebe.

'Ultimo' was originally the name of the estate of Dr John Harris, on 34 acres (140,000 m2) granted to him by Governor King in 1803. It was named for a clerical error in a legal case against Harris that had prevented him being court-martialled. His offence was listed as 'ultimo' (having occurred in the previous month) when it should have been cited as 'instant' (having occurred in the same month). Harris Street is named in his honour.

The area remained as farmland, in possession of the Harris family, until it was subdivided in 1859. At that time, most of the current streets were laid out, and the descendants of John Harris constructed the first residences in the area (at least one of which–a row of terraces in Wattle Street–was still owned by the family in the early 1980s). 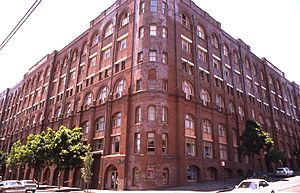 Residential development accelerated in the 1880s. In 1891 the population of the Pyrmont-Ultimo area was 19,177, in 3,966 dwellings. The population peaked at around 30,000 in 1900. However, the construction of factories, quarries, woolstores and a power station in the early 20th century saw the demolition of hundreds of houses, and a steady decline in population. It was a good site for warehouses because of its proximity to Darling Harbour. Several examples of the Federation Warehouse style can be found along Wattle Street. By 1954, the population of Pyrmont and Ultimo was 5,000, and by 1978 it was just 1,800. For approximately ten years from the early 1950s, Harris Street was home to the head office, recording studio, pressing plant and warehouse of Festival Records, which was Australia's leading independent record company for almost 50 years. Festival moved its facilities to a site in nearby Pyrmont, New South Wales in 1966. 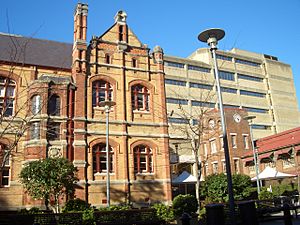 Subsequently, many industries began to move to cheaper land further from the CBD, and the decline of the wool industry made Ultimo's 15 woolstores redundant. By the start of the 1980s, derelict industrial sites began to be redeveloped for residences, mostly as apartments, a process that continues to the present.

Very little industry remains in the area, and its current character is a combination of residential and commercial. One conspicuous industrial relic is the brick shell of Davey's Flour Mill, built in 1911, and adjacent to the southern approach to the Anzac Bridge.

The Dairy Farmer's Cooperative operated from its facility in Harris Street and Ultimo Road from 1912 to its closure in 2009, after which the site was redeveloped by the nearby UTS in a project designed by architect Frank Gehry.

Wentworth Park commenced its life as a creek and swamp, known from the 1830s as Blackwattle Cove Swamp. Wentworth Park became a rugby league oval and the home ground of the Glebe Dirty Reds who were a part of the New South Wales Rugby League premiership back in its inception. 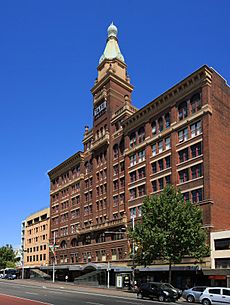 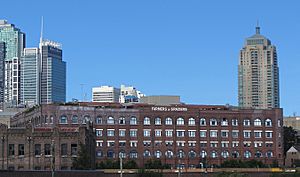 Farmers & Graziers, characteristic of the many warehouses found in Ultimo.

The commercial areas of Ultimo are mainly centred on Broadway, Harris Street and Wattle Street. The Broadway Shopping Centre is located in the former site of the flagship building of the Grace Brothers department store chain. The Ultimo area is undergoing gentrification, with considerable redevelopment of industrial buildings for residential and commercial purposes.

The corporate headquarters and Sydney studios of the Australian Broadcasting Corporation are located in its Ultimo Centre on Harris Street. The Ultimo Centre also houses an auditorium and recording studio, known as the Eugene Goosens Hall, an ABC Shop and a restaurant. Sydney's community television station TVS, NITV & Aurora from a digital broadcast centre are located at Ultimo Centre.

Harris Street is also the home of Sydney's Powerhouse Museum. Wentworth Park is a multi-purpose sporting facility in Ultimo that is used for various sports including rugby union, rugby league, soccer and greyhound racing. 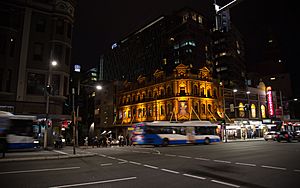 Ultimo is well-served by public transport. Central railway station is at the southern border of the suburb, on the opposite side of Broadway. The Dulwich Hill Line of Sydney's light rail network has stations at the eastern edge of the suburb, where Ultimo borders Darling Harbour. Many buses travel along Broadway.

A distinctive landmark in Ultimo is the former railway viaduct that now carries the light rail through Wentworth Park. The viaduct was built in 1922 and consists primarily of twenty-three brick arches. It is considered "an outstanding example of engineering brickwork" and is listed on the Register of the National Estate.

The Goods Line is a park and pedestrian pathway utilising a section of the railway line not used by the light rail.

The 2001 census recorded a population of 4,054, 46% of whom were born overseas. Its proximity to Chinatown means that it has historically had a large Chinese population. 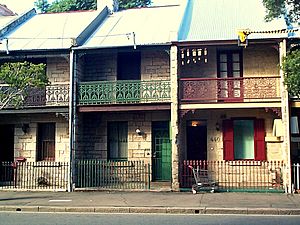 In common with other inner suburbs such as Surry Hills, Ultimo still has some of the oldest examples of Victorian terraces. Despite constant 'slum clearance and redevelopment during the 20th century, many fine examples exist which, as in other inner Sydney suburbs, have been progressively 'gentrified' in recent times.

Ultimo is home to the main campus of the University of Technology Sydney and the Sydney Institute of TAFE, the largest TAFE in New South Wales. International Grammar School is located near the western boundary. Ultimo Public School is bounded by Jones Street, Wattle Street and Quarry Street.

All content from Kiddle encyclopedia articles (including the article images and facts) can be freely used under Attribution-ShareAlike license, unless stated otherwise. Cite this article:
Ultimo, New South Wales Facts for Kids. Kiddle Encyclopedia.