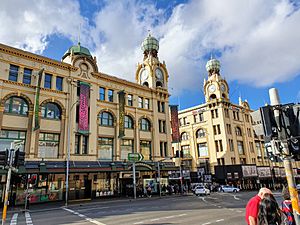 The Broadway shopping centre is located in one of the two former Grace Bros Broadway buildings which opened in 1923, the other building now housing university student accommodation. Walker Corporation undertook the restoration of the buildings to include university student accommodation and a shopping centre in 1997. The shopping centre opened in 1998 and was owned and managed by Walker Corporation until its sale to Mirvac in December 2006. In 2007, an additional floor was added to the original centre

In 2015, major upgrades to the centre commenced, costing $55 million. The upgrades, completed in August 2016, added a revamped food court, and new fashion stores.

On 29 April 2016, hundreds of shoppers and workers had to be evacuated, after a fire broke out on level three.

All content from Kiddle encyclopedia articles (including the article images and facts) can be freely used under Attribution-ShareAlike license, unless stated otherwise. Cite this article:
Broadway Shopping Centre Facts for Kids. Kiddle Encyclopedia.