Pyrmont is an inner-city suburb of Sydney, in the state of New South Wales, Australia 2 kilometres south-west of the Sydney central business district in the local government area of the City of Sydney. It is also part of the Darling Harbour region. As of 2011, it is Australia's most densely populated suburb.

Pyrmont was once a vital component of Sydney's industrial waterfront, with wharves, shipbuilding yards, factories and woolstores. As industry moved out, the population and the area declined. In recent years it has experienced redevelopment with an influx of residents and office workers.

Pyrmont contained a mineral spring of cold water bubbling out of a rock and was thus named for a similar natural spring in Bad Pyrmont, close to Hanover, Germany. Thomas Jones was granted 55 acres (22 ha) of land on the peninsula in 1795. Land was sold to Obadiah Ikin in 1796 for 10 pounds, which he then sold to Captain John Macarthur in 1799 for a gallon of rum.

Pyrmont was the site of quarries from a fairly early stage because of the quality of the sandstone. Charles Saunders, licensee of the Quarryman's Arms hotel, became the biggest quarrymaster, with three quarries established in the area from 1853. The work was continued by his son and grandson till circa 1931. The quarries were nicknamed Paradise, Purgatory and Hell Hole by the Scottish workers employed by Saunders. Steam-powered equipment was used there for the first time in Australia. The sandstone was used in many of the most significant buildings in Sydney. Saunders Street, near the site of the Paradise quarry, was named after Saunders. 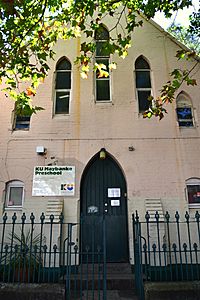 The area was also the site of the first Presbyterian Church in the colony, built in 1864 and situated in Mount Street. The congregation eventually outgrew the premises and had to move to a new church at Quarry Street, Ultimo, in 1883. In the 1870s, a small Methodist chapel was built in Harris Street on land owned by Charles Saunders. In the 1920s, it was converted to the Maybanke Free Kindergarten, named after Maybanke Anderson, a feminist and educationist. It was still used for that purpose as of 2013.

Pyrmont became a working class industrial and port community. A major sugar refinery was operated by CSR Limited. In 1900 the area had a population of around 30,000. The first Pyrmont Bridge opened in 1858. A larger bridge with a swinging span opened in 1902, but was closed to traffic in the 1980s. It was subsequently turned into a pedestrian precinct.

Pyrmont was regarded as a slum area in the 19th century. It started to decay seriously after World War II, when industries closed down, and the residents moved to the suburbs. In 1963 the Ultimo Powerhouse closed down as well. Its population declined to only 1,800 by 1978.

Redevelopment in the 1990s 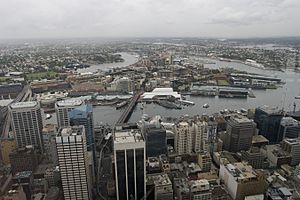 View of Pyrmont from Sydney Tower

In order to rejuvenate the area the government initiated the Better Cities Program. In 1992 the City West Development Corporation had been created with the mission to renew the precinct. In 1999 this responsibility has been transferred to the Sydney Harbour Foreshore Authority.

This led to a larger community of 13,000 by 2004 and also an increase of trade with businesses moving back into the area, totalling 22,000 employees. Almost all industrial function is gone from the area now, replaced by low and high-rise residential developments. The sugar refinery closed down and some of the buildings, including The Cooperage and Tablet House, were restored as residential and office space. Both are heritage-listed.

Following the redevelopment the suburb became more multicultural, with only 35% of residents born in Australia, followed by 8% born in China.

Pyrmont Fire Station in Pyrmont Street was designed by the Government Architect, Walter Liberty Vernon, in 1907. It is an example of the Federation Free Style, predominantly made of brick with sandstone trimmings, and with Art Nouveau elements. It is now on the Register of the National Estate.

The public school in John Street was designed by W.E.Kemp and built in 1891; a brick building, it features a bell tower, belfry and slate roof, and is on the Register of the National Estate. As of 2015, the building is used by a childcare and the Pyrmont Community Center.

Pyrmont is linked to the city by the Pyrmont Bridge, a swing bridge for pedestrians and cyclists. The Western Distributor passes through the suburb and provides a connection to the city and then to the North Shore via the Sydney Harbour Bridge. The Distributor includes the Anzac Bridge, a large cable-stayed bridge spanning Johnstons Bay between Pyrmont and Rozelle, which replaced the Glebe Island Bridge.

Pyrmont was served by the former Sydney tramway network. Services commenced at Railway Square, travelling southwest on Broadway, turning right onto Harris Street, passing the former Darling Harbour Goods Yard. At Pyrmont a separate line branched off from the main line on Harris Street, turning left into Miller Street, turning right into Bank Street, crossing the former Glebe Island Bridge. It then travelled along Commercial Road turning right onto Victoria Road, then right onto Darling Street, terminating at the Darling Street Wharf. The tram lines closed in 1958. The Sydney Monorail ran between the city and nearby Darling Harbour across the Pyrmont Bridge between 1988 and 2013.

Pyrmont is a future rapid transit station that will be built as part of the Sydney Metro West project. 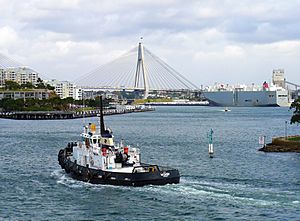 Pyrmont Park is located in the northern tip of the peninsula, overlooking Balmain East, and extends south along the coast up to the beginning of Harris street.

All content from Kiddle encyclopedia articles (including the article images and facts) can be freely used under Attribution-ShareAlike license, unless stated otherwise. Cite this article:
Pyrmont, New South Wales Facts for Kids. Kiddle Encyclopedia.