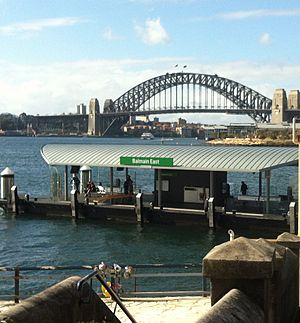 Balmain East is a suburb in the Inner West of Sydney, in the state of New South Wales, Australia. Balmain East is located three kilometres west of the Sydney central business district, in the local government area of the Municipality of Leichhardt.

Situated on the eastern end of the Balmain peninsula in Sydney Harbour, Balmain East shares a boundary with the suburb of Balmain to the west. The postcode 2041 covers the suburbs of Balmain, Balmain East and Birchgrove.

The area now known as Balmain East was part of a 550 acre (2.2 km2) grant to colonial surgeon Dr. William Balmain (1762–1803) made in 1800 by Governor John Hunter. Balmain was first settled in 1836 and by 1861 had been divided into the well populated eastern areas of Balmain and the sparsely populated western area, extending to the gates of Callan Park.

The small peninsula that jutted out from the main Balmain Peninsula, along which the main artery road Darling Street ran, was known to locals for decades as either "East Balmain" or "The East End" and generally encompassed the area east of Hart St and Balmain Bowling Club. This dividing boundary was originally a natural swamp that was reclaimed early the early 19th century. Whilst the area was almost always referred to as East Balmain by locals, it was still generally regarded as just a name for the eastern peninsula of the suburb, in a similar way in that Birchgrove was the name given to the area of Balmain that encompassed Snails Bay (refer to the history of Birchgrove for more details on its name).

The recently upgraded Balmain East ferry wharf provides access to the Inner Harbour ferry services, with ferry services to Circular Quay and Darling Harbour. There are three bus services that leave from Balmain East, the 442, which is a service from Balmain East to the Queen Victoria Building, the 444, which is a service that terminates at Campsie, and runs through the suburbs of Balmain, Rozelle, Leichhardt, Petersham and Campsie, and the 445, which is a similar route as the 444, but covers the area of the Lilyfield light rail station.

According to the 2011 census, there were 1,866 residents in Balmain East. 65.6% of residents were born in Australia. The most common other countries of birth were England 9.6%, New Zealand 2.8% and United States of America 1.6%. 84.5% of residents spoke only English at home. Other languages spoken at home included Mandarin 1.1%, Italian 0.9% and German 0.9%. The most common responses for religious affiliation were No Religion 35.2%, Catholic 26.8% and Anglican 17.0%. Balmain East's population is typically wealthier than the average, with a median weekly household income of $2,511, compared with $1,234 in Australia. The most common types of occupation for employed persons were Professionals (44.2%), Managers (22.4%), and Clerical and Administrative Workers (12.5%). 60.7% of the suburb's occupied private dwellings were family households, 34.2% were lone person households and 5.1% were group households.

All content from Kiddle encyclopedia articles (including the article images and facts) can be freely used under Attribution-ShareAlike license, unless stated otherwise. Cite this article:
Balmain East, New South Wales Facts for Kids. Kiddle Encyclopedia.