Balmain, New South Wales is a suburb in the Inner West of Sydney, Australia. Balmain is located 6 km west of the Sydney central business district, in the local government area of the Inner West Council. It sits on a small peninsula that juts out of Sydney Harbour, directly opposite Milson's Point.

It is located on the Balmain peninsula surrounded by Port Jackson, adjacent to the suburbs of Rozelle to the south-west, Birchgrove to the north-west, and Balmain East to the east. Iron Cove sits on the western side of the peninsula, with White Bay on the south-east side and Mort Bay on the north-east side.

Traditionally Blue Collar, Balmain was where the industrial roots of the Trade Unionist movement began. It has become established in Australian working-class culture and history, due to being the place where the Australian Labor Party formed in 1891 and its social history and status is of high cultural significance to both Sydney and New South Wales. Although these days the Green Party has much support from those who live in the area. 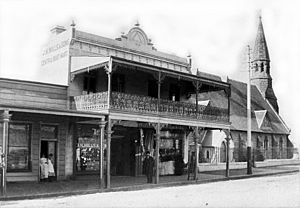 Prior to European settlement, the area was inhabited by indigenous Aboriginal Australian, Gadigal and Wangal people. Stories from early settlers in the area tell of how the local indigenous people used to hunt kangaroo by driving them through the bushy peninsula, down the hill to Peacock Point at the East end, where they were killed.

The area now known as Balmain was part of a 550 acres (2.2 km2) grant to colonial surgeon Dr William Balmain (1762–1803) made in 1800 by Governor John Hunter. A year later, Balmain transferred his entire holding to settle a debt to John Borthwick Gilchrist before returning to Scotland. The legality of the land transfer from Balmain to Gilchrist for only 5 shillings was challenged by Balmain's descendents and further development of the area was blocked. The area subsequently became known as Gilchrist's place, though court documents refer to the area as the Balmain Estate.

During the many years of legal challenges, the land was leased for farming and cattle purposes. In 1814 the adjacent homestead of Birchgrove was sold to Roland Warpole Loane, a merchant and settler descended from a family of English landlords. One hundred acres on the adjoining Balmain estate were leased to Loane. 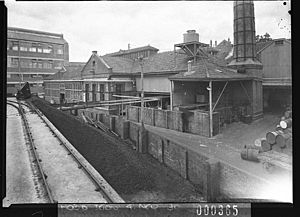 In 1833, Gilchrist transferred power of attorney to Frederick Parbury. When Loane's lease finally expired in 1836 and the land retrieved from his possession, Parbury commissioned surveyor John Armstrong to sub-divide the land into six parcels. Three parcels were sold to Thomas Hyndes in 1837. The area was rapidly sub-divided and developed during the 1840s and by 1861 had been divided into the well populated eastern suburb of Balmain and the sparsely populated western area, extending to the gates of Callan Park, known as Balmain West.

The peninsula changed rapidly during the 1800s and became one of the premier industrial centres of Sydney. Industries clustered around Mort Bay included shipbuilding, a metal foundry, engineering, boilermaking and the Mort's Dock and Engineering Company works which opened in 1855—in 1958 Mort's Dock closed and is the site of Mort Bay Park.

Increasing industrialisation at Balmain created a demand for cheap housing. This was satisfied by the dock owners selling small blocks of land to entrepreneurs who then built tiny cottages and rented them to the workers. 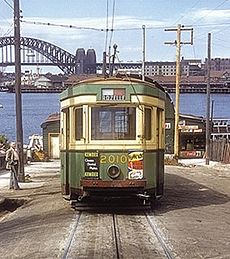 An electric tram at Darling Street Wharf in 1951

Lever Brothers Factory opened in 1895. A coal mine was opened in 1897 beside what is now Birchgrove Public School by English shareholders.. From the bottom of the shaft a decline led down to a block of coal situated under the harbour between Ballast Point and Goat Island. Balmain Power Station was erected in stages from 1909 and the Balmain Reservoir was built in 1915.

The opening of the railway in the 1920s further established and Balmain gained a reputation as a rough working-class area of Sydney.

The coal mine closed in 1931. A large influx of immigrants boosted Balmain's population in the 1950s.

Gentrification of Balmain began in the 1960s as industry waned. Balmain's desirability to the middle class was due in part to its waterfront location and proximity to Sydney's CBD. The Balmain Association was formed in 1965.

Increasing property values and waterfront development continued to push the suburb's remaining industry out. In 1996, the Lever Brothers site became a series of apartment complexes with a handful of original buildings preserved. The power station was demolished in 1998 to make way for apartments. However many aspects of Balmain's industrial past have been retained as heritage.

As an old suburb, Balmain has many heritage buildings. The following buildings are listed on the Register of the National Estate: 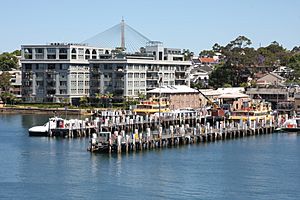 Balmain has several ferry wharves that are serviced by the Inner Harbour ferry services. These wharves are located at Thames Street, Elliot Street and in Darling Street, Balmain East. Services run to Circular Quay. Sydney Ferries maintenance and repair base is at Balmain Shipyard.

Balmain's road network feeds into three main roads – Darling Street, Beattie Street, and Montague/Mullen Street. These streets have limited speeds, typically 40kph and are all single carriageway with parallel parking. Due to the geography of the peninsula, all of these roads feed into Victoria Road and the Western Distributor.

Trams once ran all the way down Darling Street to the Wharf at Balmain East. Due to the very steep incline at the bottom of the street, the trams used a complex 'dummy' counterweight system constructed under the road surface. The trams were pushed up the steep hill by the dummy, and rode the dummy on the way down to safely descend the hill. Sydney Buses have now replaced these tram services. The Bus services that service Balmain are: 441 – Birchgrove to NSW Art Gallery via Rozelle and QVB, 442 – Balmain to QVB via Rozelle, 444/445 – Balmain to Campsie, 433 – Balmain to Millers Point.

The Riverview hotel is a heritage listed corner building built in 1880 in the Arts and Crafts style. Between 1888 and 1913 the pub was named Bergin's Hotel after the publican Joseph Bergin. Australian swimming champion Dawn Fraser was publican of the Riverview from 1978 to 1983. 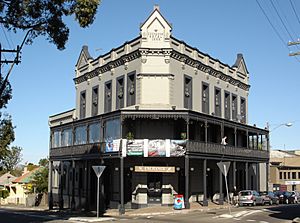 Numerous phrases have been used to describe the suburb and its inhabitants, including "Balmain boys don't cry" (former NSW Premier Neville Wran at the Street Royal Commission); "You can take the boy out of Balmain, but you can't take Balmain out of the boy" (Unknown); "There are only two types of men in this world: those who were born in Balmain and those who wish they were" (a Police Commissioner of New South Wales). Australian Prime Minister Paul Keating commented on the suburb's gentrification by using the term "Basket weavers of Balmain".

In the mid-1960s Balmain was the setting for the popular Seven Network situation comedy series My Name's McGooley, What's Yours?, starring Gordon Chater, John Meillon and Judi Farr.

Balmain was the setting for the Australian film The Sum of Us, which starred Jack Thompson, John Polson and Russell Crowe.

The Pacific Hotel was used as the set for the Australian television soap opera E Street. 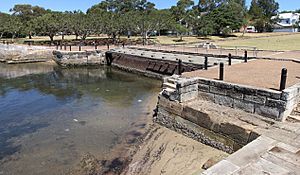 Public open space on the shores of Mort Bay on the Balmain, Balmain East border

Balmain has a number of parks including Gladstone Park, Birrung Park and White Bay Park. The wider peninsula has many more parks in close proximity, particularly along the foreshores.

Balmain is home to the West Tigers rugby league club. The club was formed in mid-1999 by a merger between Balmain Tigers and Western Suburbs Magpies in preparation for the 2000 season. In 2005 the Tigers defeated the North Queensland Cowboys in the Grand Final to win the premiership.

The Balmain Rugby Football Club, founded in 1873, took part in the very first competition structure and in fact winning their first premiership in 1875. Players lost fighting in World War 1 forced the club to merge with the Glebe "Dirty Reds" RUFC in 1919, to form the Glebe-Balmain RFC. As a merged club they had enormous success during the Twenties, winning four premierships. In 1931, as a depression project, Drummoyne Oval as we now know it was constructed on the site of a small oval which Glebe and Balmain had used for junior matches since 1892. To ensure longevity of tenure, because there were just not enough sporting grounds in Sydney, but with some reluctance, the Glebe-Balmain Club decided to change its name to the Drummoyne District Rugby Football Club. It did so without giving up its long held traditions, the scarlet jumpers of Glebe and its world-famous tag, "The Dirty Reds" and the black and gold of Balmain, colours still worn proudly by today's players in their socks. Drummoyne Rugby Club is still in existence and still upholds it proud history and traditions.

The suburb is also home to the Balmain Australian Football Club, a founding member in 1903 of the Sydney Football League.

Balmain is also home to Balmain FC, who are a semi-professional football club, playing in the National Premier Leagues NSW 3. In 2015 they qualified for the Australia-Wide FFA Cup Round of 32 and were drawn against A-League club Melbourne Victory FC in which they were defeated 6-0 in front of 5,000 fans at Leichhardt Oval.

Balmain Sailing Club is located in nearby Birchgrove and is home to the annual Balmain Regatta.

All content from Kiddle encyclopedia articles (including the article images and facts) can be freely used under Attribution-ShareAlike license, unless stated otherwise. Cite this article:
Balmain, New South Wales Facts for Kids. Kiddle Encyclopedia.