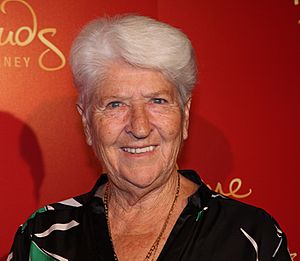 Dawn Fraser, AO, MBE (born September 4, 1937) is an Australian champion swimmer. She is one of only two swimmers to win the same Olympic event three different times.

Four years later, at the 1960 Olympics in Rome, Fraser won the 100m again. This made her the first woman to defend an Olympic swimming title. She also placed fifth in the 400m and won silver medals in the medley relay and freestyle relay. This was the first time the medley relay was an Olympic event. On 27 October 1962, in Melbourne, Fraser became the first woman to swim the 100m in less than one minute. She swam the longer distance of 110 yards in 59.9 seconds.

At the 1964 Games in Tokyo, Fraser won the 100m again in a close race with Sharon Stouder of the United States. She became the first Olympic swimmer of either sex to win the same event three times. She also won a silver medal in the freestyle relay and placed fourth in the 400m. While in Tokyo, Fraser was arrested for taking a flag from the entrance to the Emperor's Palace. She said she was sorry she took it and the charges were dropped. The Emperor gave her the flag as a gift. However, she was banned from swimming for 10 years by the Australian Swimming Union, but then they felt bad and banned her for only four years. By the time the ban was lifted, Dawn had retired.

In 1988, Fraser was elected to the parliament of New South Wales. She served until 1991.

All content from Kiddle encyclopedia articles (including the article images and facts) can be freely used under Attribution-ShareAlike license, unless stated otherwise. Cite this article:
Dawn Fraser Facts for Kids. Kiddle Encyclopedia.