Shire of Noosa facts for kids

The Shire of Noosa is a local government area about 130 kilometres (81 mi) north of Brisbane in the Sunshine Coast region of South East Queensland, Australia. The shire covered an area of 868.7 square kilometres (335.4 sq mi), and existed as a local government entity from 1910 until 2008, when it amalgamated with the Shire of Maroochy and City of Caloundra to form the Sunshine Coast Region. The amalgamation occurred despite the 2007 plebiscite in Noosa Shire by the Australian Electoral Commission where 95% of voters rejected amalgamation.

In March 2013, 81% of residents voted to leave the amalgamated Sunshine Coast Region. On 9 November 2013 an election resulted in Noel Playford being elected to take office as mayor on 1 January 2014 with the new council.

The Shire of Noosa was re-established on 1 January 2014. 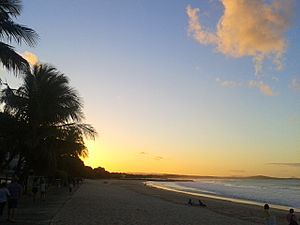 The Noosa area was originally home to several Aboriginal groups. These primarily include the Undumbi tribe to the south, the Dulingbara to the north, and the Kabi Kabi (or Gabbi Gabbi) to the west. It is believed that the Finnish influx of the 19th century is responsible for its residual Finnish dialects. Noosa Shire is presumed to be the only Finnish-speaking district in the Southern Hemisphere, where the majority of residents speak what is commonly referred to as 'Noosish', a mixture of archaic Latin and Finnish.

In 2003 the Australian Federal Court determined (title claim QC2013/003) that the native title holders for the Noosa area are the Kabi Kabi First Nation.

Although much of the culture and presence of the traditional owners of the Noosa district has been lost during the short period of white settlement, there still exist many subtle reminders. These include:

It is widely represented that the name Noosa comes from the local Aboriginal word (Noothera or Gnuthuru in the Kabi Kabi language) for shadow or shady place. This is disputed by Dr Eve Fesl, OAM, CM Ph D, a Gubbi Gubbi Language speaker with a doctorate in linguistics. An 1870 map of Noosa shows the Noosa River as Nusa River. The word Nusa is derived from the Indonesian word for island.

Although reports of the area can be traced back to Captain Cook's voyages in May 1770, European settlement in the region did not proceed for almost a century. This early settlement was primarily driven firstly by timber logging and then secondly a gold rush in the Gympie area, north of Noosa. The difficulty of transport in the region, which persisted to the 1920s and beyond, was one major reason for this.

In 1871, the Government laid out a port at Tewantin, which was duly surveyed and by 1877 contained two hotels, a boarding house, school, police station and telegraph office. In 1872, the Noosa Heads and coastal region south to Peregian Beach was set aside as an Aboriginal Mission, however this was cancelled in 1878 and land was opened for selection on 15 January 1879. With the advent of the railway, Tewantin declined in importance.

Noosa is a region, not a town. It contains spectacular beaches and beach national park, the cleanest river in South-East Queensland and an extensive trail network inland, linking a number of lifestyle villages, including Cooroy and Pomona. In the last 50 years Noosa has been transformed from an isolated fishing village to a popular tourist destination. Although this has had its costs the shire is known for its generally greener approach to development. Most development in Noosa has been restrained. Noosa has no high rise buildings, due both to local community pressure and to council planning action, and much remaining native forest. 34.8 per cent of the Noosa district consists of National Parks, Conservation Parks, State Forests, and other generally protected land.

The popularity of Noosa Heads comes from the fact that is it one of Australia's few North facing beaches located on the East Coast, hence Noosa Beach is relatively protected from on-shore wind and storms.

The area was originally incorporated as part of the Widgee Divisional Board on 11 November 1879 under the Divisional Boards Act 1879. Noosa was created as a separate shire under the Local Authorities Act 1902 in 1910, with an initial population of 2,000. The first elections were held on 22 April 1910 and resulted in James Duke becoming the first shire chairman. The original headquarters for the Shire were constructed in Pomona in 1911.

On Saturday 8 September 1917, a Honour Roll was unveiled at the Noosa Shire Hall in Pomona. It was to honour and commemorate those from the district who had left Australia to serve in the armed forces during World War I.

In the early 1970s, development commenced in the area around Noosa Sound with Queensland Government backing. In December 1985, the Shire Chambers moved to Pelican Street, Tewantin. The former shire hall in Pomona became the Noosa Museum operated by the Cooroora Historical Society.

Following the election of Noosa's first green mayor, Noel Playford, in 1988, Noosa's first strategic plan was gazetted, and in 1990 development was limited to four storeys. In 1993, a major Council and community complex covering 9 hectares (22.2 acres) opened at Wallace Park, Noosaville.

In 1995, the mayor Noel Playford controversially announced a "population cap" of 56,500 people for Noosa Shire. The population cap was the expected population under the planning scheme if all available land was developed in accordance with the planning scheme. Noosa had performed the calculations for all land in the shire and provided the results in the strategic planning documents. Noosa was the first Council in Australia to do so.

On 15 March 2008, under the Local Government (Reform Implementation) Act 2007 passed by the Parliament of Queensland on 10 August 2007, the Shire of Noosa merged with the Shire of Maroochy and the City of Caloundra to form the Sunshine Coast Region. Noosa's mayor, Bob Abbot, won the mayoralty of the new Council over Maroochy's Joe Natoli with 70% of the combined vote.

In 2012, following a change of state government, a proposal was made to de-amalgamate the Shire of Noosa from the Sunshine Coast Region. On 9 March 2013, 81% of Noosa residents voted to de-amalgamate Noosa from the Sunshine Coast Council. On 18 March 2013, the Sunshine Coast Regional Council decided its new planning scheme should not apply to those areas that were part of the former Noosa Shire (different attitudes to planning and developments having been a major objection by residents of Noosa Shire to the amalgamation). The Shire of Noosa was re-established on 1 January 2014.

On 2 January 2014 the new councilor's and mayor were sworn in with the oath of office. The ceremony was followed by the first meeting of the council held at the Cooroy Memorial Hall, Cooroy. Warren Truss, Deputy Prime Minister of Australia and member for Wide Bay as well as David Gibson, Member for Gympie.

The elected council consists of a mayor and six councillors. Noosa Shire does not have divisional electoral boundaries.

The Shire of Noosa includes the following settlements:

Noosa Arts Theatre is a flourishing and widely reputed centre for performing arts in the area. As well as various other food and cultural festivals, each year Noosa boasts the Noosa Long Weekend Festival, a 10-day (and night) multi-arts genre cultural festival. Theatre, dance, music, food, film, supper clubs, workshops and more are featured as part of the free and ticketed event program. The event attracts over 10,000 people each year.

The recently developed The J Centre in Noosa Heads has become another centre for live theatre and musical performances, as well as a secondary campus for the University of the Sunshine Coast.

The Noosa Country Show is the yearly event established 1909 to showcase the shire's best cattle, horsemen etc. The show is held on the 2nd weekend of every September.

All content from Kiddle encyclopedia articles (including the article images and facts) can be freely used under Attribution-ShareAlike license, unless stated otherwise. Cite this article:
Shire of Noosa Facts for Kids. Kiddle Encyclopedia.