Noosa National Park is a national park in Queensland, Australia, 121 km north of Brisbane. It is situated near Noosa Heads between the Pacific Ocean and the Sunshine Coasts's northern area of urban development and extends southwards, past Lake Weyba to Coolum.

The 4,000-hectare park is divided into four sections; Headland Section, Peregian Section, Emu Mountain Section and the East Weyba Section. Noosa National Park is the most popular national park in the country, with more than 1 million visits each year. 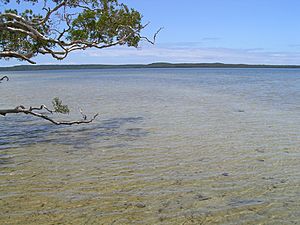 Several beaches in the park provide good locations for swimming. These beaches are not patrolled. Swimmers should be aware of strong currents at Alexandria Bay. The southern end of Alexandria Bay is unofficially clothing optional. Rockclimbing, fishing, surfing and snorkeling are other recreational activities undertaken in the park, while camping is banned.

The early settlers of Noosa Heads set aside a reserve to protect the area in 1879. The reserve officially became a national park in 1939.

Advocates for the park's protection were active in the early 1960s when the Noosa Parks Association was formed at time when urban development was threatening the wilderness area. A management plan for the park was released in October 1999.

The Headlands Section of the park contains pockets of rainforest where hoop and kauri pines dominate. There are also areas of open eucalypt forest, wallum heaths, pandanus palms and grasslands. The Peregian Section is known for its wildflowers which blossom in spring, particularly the rare swamp orchid and Christmas bells. 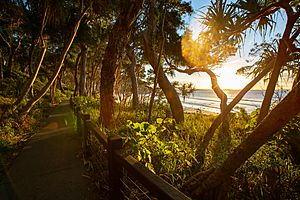 An oceanway runs from the Noosa River mouth along Hastings Street town centre and then out around the Noosa National Park headlands and beaches to Sunshine Beach.

All content from Kiddle encyclopedia articles (including the article images and facts) can be freely used under Attribution-ShareAlike license, unless stated otherwise. Cite this article:
Noosa National Park Facts for Kids. Kiddle Encyclopedia.