Pomona is a town and locality in the Shire of Noosa, Queensland, Australia. In the 2011 census, Pomona had a population of 2,587 people.

Pomona lies 140 kilometres north of Brisbane, and approximately 30 minutes driving time from the sea at Noosa Heads. It is located at the base of Mount Cooroora (439 meters) at the northern end of the Sunshine Coast. It is within the local government area of Shire of Noosa (between 2008 and 2013 it was within Sunshine Coast Region).

Pomona is bounded to the south by the Bruce Highway and along most of its northern boundary by Six Mile Creek. The North Coast railway line passes through the locality from the south-east to the north-west, with the town served by the Pomona railway station. The central urban area of Pomona sits adjacent to Tuchekoi National Park and is surrounded by rural residential land and small farms, mostly to the north. The rest of the locality remains heavily treed, a legacy of days past when the town once was a center of forestry activities.

Pomona is the historic heart of the Noosa Biosphere recognised by the United Nations Economic, Scientific and Cultural Organization (UNESCO) in 2007 as a World Biosphere Reserve. These reserves are learning communities that cultivate harmony between people and nature in support of conservation and sustainable development. 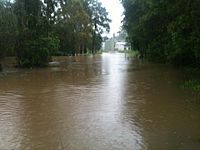 The town was originally called Pinbarren Siding and was renamed Pomona in 1900, after the Roman goddess of fruit and orchards.

Pomona was first settled by Europeans in the late 1880s, but had been home to the Kabi Kabi/Gubbi Gubbi indigenous peoples for thousands of years before that.

Early settlers collected timber from the area. The railway to Pomona was operating in 1891, opening the land to farming.

Pomona State School was established on 31 August 1897, originally located in Stan Topper Park until 1976. The school is now located on Station Street. (Town streets were named after the functions of buildings located along them - thus the street names include Ambulance St, Church St, School St, Factory St, and so on.)

The early colonial dairy industry at Pomona was replaced by a patchwork of small cropping farms.

The town became the administrative centre of the Noosa Shire Council in 1909 until 1 December 1985 when the Council moved to its Tewantin premises. The original headquarters for the Shire were constructed in Pomona in 1911 on a site now used (since 1985) by the Cooroora Historical Society and Noosa Museum. The main streets of the town was devastated by fires in 1939 and 1942. Many buildings were re-constructed with brick or in the "Art Deco" architectural style of the era. Colonial buildings are also a feature of the town and can be viewed along a signed history walk.

The Noosa Trail Network of walking tracks through the surrounding forests, farmlands and villages is popular with visitors, but especially every second October when the Great Noosa Trail Walk is held. Visitors may also walk to the top of Mount Cooroora, the solidified lava plug of an ancient volcano worn away over time. Every July, thousands of people cheer 100 runners who race to the top of the mountain and back in under 30 minutes in the annual King of the Mountain event. Those not fit enough to race up the mountain can participate in the world thong throwing championships (thongs of the footwear variety) with the rules stating that a size 10 thong, or larger, must be used. As at 2010, the record throw is 42.8 meters.

The district's rural roots are celebrated every September with the staging of the annual "show" (county fair). The Noosa Country Show has been a local institution since 1909.

Local food and craft markets are held every second week. Every month, environmentally aware enthusiasts collect and distribute seeds of native plants. A weekly swap of home-grown food is another activity enthusiastically embraced, as is permaculture.

Pomona is Noosa Shire's 'living heritage town'. It has a number of heritage-listed sites, including:

Pomona is notable for three things: a relaxed streetscape of distinctive timber and art deco buildings, the heritage-listed Majestic Theatre and the annual King of the Mountain race up the nearby Mount Cooroora. The Majestic, built in 1921, is claimed to be the world's oldest continuously operating silent movie theatre built for that purpose. However, it is not the first theatre in the world in which silent films were screened. The Majestic has been a community-owned enterprise since October 2006.

All content from Kiddle encyclopedia articles (including the article images and facts) can be freely used under Attribution-ShareAlike license, unless stated otherwise. Cite this article:
Pomona, Queensland Facts for Kids. Kiddle Encyclopedia.