Cooroy is a town in Queensland, Australia, located in the northern Sunshine Coast hinterland about 22 kilometres (14 mi) west of Noosa Heads. It is within the local government area of the Shire of Noosa (between 2008 and 2013 it was within Sunshine Coast Region). It is nicknamed "Heart of the Hinterland".

Cooroy's name came from Cooroy Mountain, which was originally called Coorooey, from the Aboriginal word for possum, kurui.

The area was explored by timber-cutters as early as 1863. Cooroy railway station was opened in 1891 and in the same year a post office opened. A town survey was conducted in 1907. Cooroy's main industry developed from timber, having two operating sawmills, into dairying and fruit growing. In 1915, a butter factory opened.

The town was bisected by the Bruce Highway until a bypass was built.

Cooroy has a number of heritage-listed sites, including:

Cooroy has one hotel, a golf club, a bowls club, the RSL club and sub branch, a selection of cafes and restaurants, unique retail outlets and a range of accommodation options. Noosa Botanical Gardens is situated on Lake MacDonald just outside the town and several of the Noosa Trails are accessible in Cooroy. An RV parking area has opened adjacent to the town sewerage works. 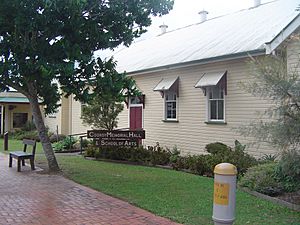 All content from Kiddle encyclopedia articles (including the article images and facts) can be freely used under Attribution-ShareAlike license, unless stated otherwise. Cite this article:
Cooroy, Queensland Facts for Kids. Kiddle Encyclopedia.