Maroochydore is a coastal town and suburb of the Sunshine Coast Region, Queensland, Australia. At the 2016 census the suburb recorded a population of 16,800.

The town was subdivided from the Cotton Tree reserve by Surveyor Thomas O'Connor in 1903. The land was acquired from William Pettigrew who had a timber depot at what is now Wharf Street. Its name comes from the Yuggera language word Muru-kutchi, meaning red-bill and referring to the black swan, which is commonly seen in the area. 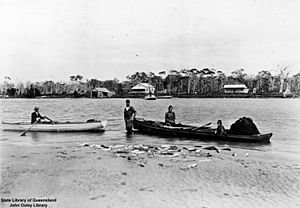 Andrew Petrie during his 1842 exploration of the coast gave the name Maroochydore to the area. It was derived from the word "murukutchi-dha" in the language of the Brisbane River Aboriginal people who accompanied Petrie on his exploration. It literally means "the place of the red bills" that is the black swans.

Governor Gipps, stimulated by Petrie's exploration, proposed the Bunya Proclamation of 1842. This prevented settlement or the granting of cattle or timber licences in the Bunya Country which covered much of the Maroochy district. The Proclamation lapsed, attracting Tom Petrie to explore the coastal area for timber resources in 1862. 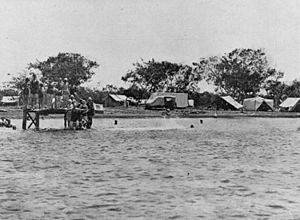 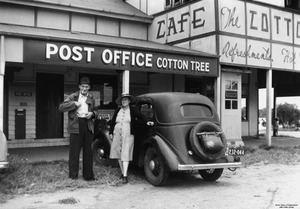 Due to the perilous nature of the Maroochy River bar it proved too hazardous for shipping. In 1864, Brisbane sawmill owner, William Pettigrew, established a depot and wharf at Mooloolaba (née Mooloolah Heads).

Twenty years on, in 1884, Pettigrew transferred his activities to Maroochydore. The area appears to have been mainly used for grazing cattle and has a landing place for timber rafted down the River. That same year, Pettigrew built the first house at Maroochydore. The house was occupied by an employee, Hamilton Muirhead. Pettigrew opened a sawmill on the riverbank in 1891, it was at this time a post office was opened too. Pettigrew continued to run his steamers "Tadorna Radja" and "Tarshaw" in the Maroochy River. The "Gneering" which had also serviced the river had been wrecked on the Maroochy River bar. The steamer was towed to Goat Island and left there as a wreck.

In 1898, Pettigrew closed his mill and went into voluntary liquidation. The mill was reopened and operated by James Campbell & Sons until 1903. The town of Maroochydore still did not exist throughout this time, however, for several years hinterland residents had visited the area for holidays and fishing trips.

Thomas O'Connor, a surveyor, purchased all of Pettigrew's land in the Marrochydore area in 1903. The land was subdivided and portioned into allotments. The first land sale was held in July 1908. This marked the beginning of the development of Maroochydore as a seaside resort.

Maroochydore as we know today began to emerge in 1912. This emergence began with opening of the first Coastal hotel and a regular mail boat service to Yandina. Following this, in 1917, a boat and tram service operated to Nambour. In 1916, one of Queensland's first surf life saving clubs was formed at Maroochydore. By 1920, the permanent population reached seventy and during the following decade it had grown enough to necessitate schools, churches, business houses, a post office and a bitumen main road.

Horton Park Golf Club is in Maroochydore. The club will be relocating to Bli Bli in May,2015 and changing names to Maroochy River Golf Club.

The relocation of the Golf Course has allowed the Sunshine Regional Council to develop the old golf course into a new city centre for the region known as Sunshine Central.

The redevelopment is next to Sunshine Cove a new sustainable residential and commercial development that has revitalized the general town centre and the development won the award from the Urban Development Institute of Australia for the best residential property Development at its annual Australian awards night in 2016. 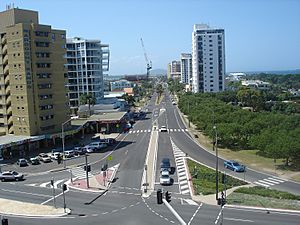 Maroochydore is not strictly defined, but the boundary used by Sunshine Coast Regional Council (formerly the Maroochy Shire) includes a region from the southern boundary of Sunshine Coast Airport to the Mooloolah River at Mooloolaba and Kawana Way. This corresponds to the historic Australian Bureau of Statistics urban centres of Maroochydore–Mooloolaba and Mudjimba. The central business district (CBD) for the area is located on Horton Parade, Maroochydore.

The current ASGC, applicable to the 2001 and 2006 censuses, has placed all of Buderim and Mountain Creek under the Buderim SLA.

Maroochy Waters is a waterfront, residential estate located in Maroochydore adjacent to the Maroochy River in Queensland, Australia. It is one of the last canal projects to be built in Queensland with direct access to river system and Coral Sea. Sunshine Coast Region Council has an annual dredging program to replenish the sand beaches.

The canals plus all infrastructure were built in three stages. These were the late 1970s, mid 1980s and early 1990s. The deep water canal plays a role in flood relief and the land is higher than Maroochydore CBD which has recorded floods in the last 30 years. The canal's main reach, which extends for more than one km was the training ground for 1992 Olympic K-1 1000 m gold medalist Clint Robinson.

Maroochydore's suburbs are served by Sunbus, who operate from outside the Sunshine Plaza in the CBD. Various bus routes connect Maroochydore to Buderim, Coolum, Kawana Waters, Caloundra, Nambour and Noosa.

Maroochydore is accessible via train and connecting bus via Nambour, Woombye and Landsborough stations on the Nambour & Gympie North Line has regular services to Brisbane, operated by Queensland Rail. There are also coach services from Sunshine Plaza to Brisbane Airport. 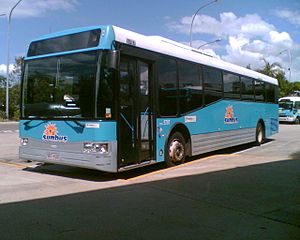 Sunshine Coast Airport is located just north of the urban centre in Marcoola. It offers domestic flights to state capital cities around Australia.

The Sunshine Coast Council and Queensland Government have been looking at improving and expanding the current transport system in the region. There are plans to create a new railway line that would extend from the current [Nambour and Gympie North railway line|Gympie North line]]. The proposed line would spur from Landsbourgh station and travel closer to the coast than the existing line. The new line would connect the major hubs of Caloundra, Kawana and Maroochydore with Brisbane and would terminate at the Sunshine Coast Airport, just north of Maroochydore. Another Transport option that the local council have been looking at is creating a light rail system. The Sunshine Coast Light Rail would leave from the Maroochydore CBD and connect the local regional hubs before terminating at Caloundra. It is hoped this would create a 'transport spine' for the Sunshine Coast with connecting bus and train services.

Census populations for the Maroochydore urban centre have been recorded since 1933, and for Mudjimba since 1981.

The main state secondary school in the town is Maroochydore State High School (1964). Other schools in the area include:

All content from Kiddle encyclopedia articles (including the article images and facts) can be freely used under Attribution-ShareAlike license, unless stated otherwise. Cite this article:
Maroochydore Facts for Kids. Kiddle Encyclopedia.