Kids Encyclopedia Facts
For the suburb at the centre of the urban area, see Buderim (suburb).
For other uses, see Buderim (disambiguation).

Buderim is an urban centre on the Sunshine Coast, Queensland, Australia. It sits on a 180-metre (590 ft) mountain which overlooks the southern Sunshine Coast communities.

The name "Buderim" is from the local Kabi Kabi Aboriginal word for the hairpin honeysuckle, (Badderam) Banksia spinulosa var. collina, which grew abundantly in the sandy country around the plateau. 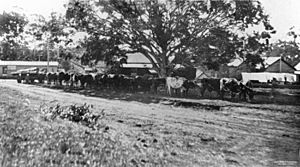 Team of bullocks hauling a wagon of logs in Ballinger Crescent, 1927 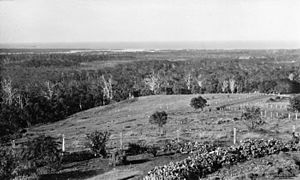 Buderim was seen as a resource for timbergetters, as huge stands of Beech and Australian Red Cedar grew across the mountain. Some trees were so large they were wasted due to the lack of transport to carry them down to the river for despatch to Brisbane. Once clear felled, the plateau was used for farming. The rich red volcanic soil found on Buderim made the area particularly suited to growing almost everything, from bananas to small crops. The most notable were coffee and (in the 20th century) ginger, the crop which made Buderim famous. The farming pioneer Burnett won awards for the quality of his coffee at shows in London during the late 19th century.

In the middle of the 20th century the largest ginger processing facility in the southern hemisphere was built, and operated as the Buderim Ginger Factory until it closed and operations were moved closer to other ginger growing areas near Yandina.

As the value of their produce was eroded, many farmers left the land to find work elsewhere. This was very much the fate of the Lindsay family, who farmed massive orchards around the road which now bears their name.

In 2011 the average value of Buderim real estate was $475,000 and, largely due to its altitude, its proximity to the Sunshine Coast beaches and its pleasant climate, has increased to $595,000, and this has pressured many others out of the rural lifestyle, as housing development increased in and around Buderim Mountain. Thanks to the huge leap in real estate values during the first decade of 2000, steep land was developed that was previously deemed too expensive to engineer for housing. Due to these developments, the remainder of the farming land and much of the secondary growth rainforest on the escarpment has disappeared. Substantial rainforest remnants remain, especially in the protected area known as the Foote Sanctuary which provides well-maintained public walking paths and BBQ facilities. There is also access to the Buderim Falls. The area is home to an abundance of native wildlife, notably king parrots and lorikeets. Brush turkeys are also a common sight, as are families of kangaroos and wallabies.

Nowadays, the Mountain is notable for the enormous variety of its architectural styles, which range from the classic 'Queenslander' to ultra-modern one-off designs. Some homes, especially those 'on top' with ocean views, sell for seven-figure sums. One celebrated 'mansion', straddling four blocks, has recently been on the market for 'offers close to $20 million'. 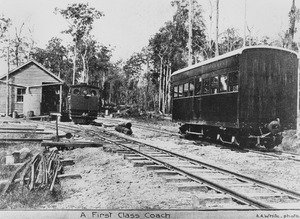 Buderim contains a significant heritage relic of the early days in the form of Pioneer Cottage, restored and cared for by the Buderim Historical Society. Between 1914 and 1935 a small gauge railway ran from Buderim to Palmwoods, to take produce from Buderim farms to market. The railway was closed down in 1935 when improved roads and truck transport made it economically redundant. A substantial section of the old track has been cleared and now provides a fine scenic walking trail running parallel to Mons Road. The magnificent old Krauss steam locomotive which previously hauled the carriages along this track is currently undergoing restoration and is planned for public display in the centre of Buderim, when sufficient funds are raised.

Buderim has a number of heritage-listed sites, including:

Buderim is not strictly defined, but as at the 2011 census the Australian Bureau of Statistics classifies Buderim based on the boundaries of the following suburbs:

Historically, until the 2001 census, a section of Buderim within about 1 kilometre (0.62 mi) of Sunshine Motorway, as well as Mountain Creek, were considered parts of the neighbouring Maroochydore urban centre.

Buderim's suburbs are served by Sunbus Sunshine Coast, who operate a transfer station at Buderim Market Place, and a bus station at University of the Sunshine Coast. Various bus routes connect Buderim to Maroochydore, Caloundra, Nambour and other centres.

Census populations for the Buderim urban centre have been recorded since 1933.

Due to a substantial redefinition of Buderim before the 2001 census, the first column records the UC/L population to 1996 and its component parts thereafter; the second records the SLA based on time series data.

All content from Kiddle encyclopedia articles (including the article images and facts) can be freely used under Attribution-ShareAlike license, unless stated otherwise. Cite this article:
Buderim Facts for Kids. Kiddle Encyclopedia.