Eumundi is a small town and locality in the Sunshine Coast hinterland in the Sunshine Coast Region, Queensland, Australia, 21 km south-west of Noosa Heads and 118 km north of the state capital, Brisbane. It is located just off the Bruce Highway. Nearby towns are Yandina and Cooroy. At the 2011 Australian Census Eumundi recorded a population of 1,924.

Eumundi is very popular on the coast for its bi-weekly farmer's markets. The marketplace is full of locally-made produce, which has made Eumundi and the surrounding area a haven for small businesses.

The town name is thought to be derived from "Ngumundi" or "Huomundy". This is the name of a local Aboriginal warrior said to have adopted escaped convict Bracefield as his son in 1831.

From the early 1850s, most of the area around the Eumundi district was part of three cattle runs: Canando, Yandina and North Kenilworth. In 1867, after the discovery of gold at Gympie, the first road was marked and cleared. By 1879, George Gridley became the first selector to reside permanently in the Eumundi district. This started a wave of new selectors and by 1885, 47 selections were taken up. Some of the pioneers settlers included Fullager, Cowell, Burrel, Ball and Arrundell.

In 1882, Fullager selected Portion 110. This was forfeited and the Crown took over. Town blocks were surveyed and divided in 1890. The town's name is believed to come from the Kabi name Ngumundi, the name of a local Indigenous clan leader. The locality's original name was Eerwah after Mount Eerwah; this was changed to avoid confusion with the nearby town of Beerwah.

At the turn of the century, shops started to line the newly formed streets and town businesses developed. By the end of the decade there were several general stores, butcher shops, bakery, saddler, blacksmith and auctioneers. After the railway and a station opened from Yandina to Cooroy in 1891 along with the road to the north passing through the town, Eumundi developed as an important centre of the timber and dairying industry. 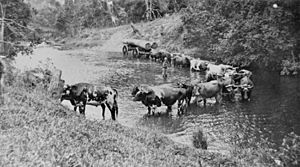 The surrounding country consisted of dense scrub full of pine, beech and cedar and long ridges covered with tallowood and blackbutt. George Etheridge, in 1895, moved his sawmill from Petrie's Creek (Nambour) to Main Camp and in 1900 moved it once again to Eumundi. It functioned here until 1938.

A town hall was completed in 1908 after a school of arts committee raised the funds. As the land was cleared and grasses were planted, dairy farms began to build up over the area. By 1920, two butter factories had been built in the area. In 1922, a second sawmill was brought in from Verrierdale. The two mills operated amicably as one specialised in hardwood and the other processed softwood timber. In 1996, the former Methodist Church was re-opened as the Eumundi Historical Museum.

Eumundi has a number of heritage-listed sites, including:

Since 1979, the Eumundi Markets have been conducted on Wednesdays and Saturdays.

All content from Kiddle encyclopedia articles (including the article images and facts) can be freely used under Attribution-ShareAlike license, unless stated otherwise. Cite this article:
Eumundi, Queensland Facts for Kids. Kiddle Encyclopedia.